Authorities said the explosion that hit a liquefied natural gas storage facility in Eastern Washington earlier this week threw 250-pound pieces of steel up to 300 yards through the air. 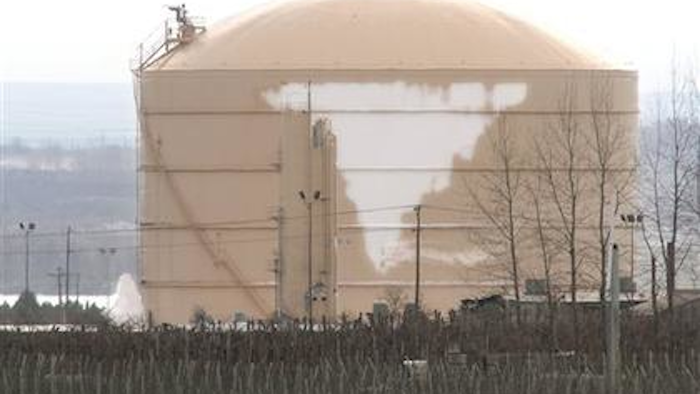 Authorities said Wednesday the explosion that hit a liquefied natural gas storage facility in Eastern Washington earlier this week threw 250-pound pieces of steel up to 300 yards through the air.

Benton County Sheriff's Deputy Joe Lusignan said Wednesday that it was "a little bit of a miracle" that no one was killed.

"It was an extremely powerful explosion, the initial explosion," he said. "Fortunately we didn't have any subsequent ones after that."

The Monday blast inside a processing plant at the Williams Northwest Pipeline LNG storage facility outside Plymouth, Wash., injured five people, and left a big gash in the side of an LNG storage tank.

But a detailed assessment of the damage inside the processing plant will have to wait for a structural engineer to assure the building is safe to enter, Williams spokeswoman Michele Swaner said.

State and federal inspectors looking into the cause of the blast have interviewed injured workers.

Some of the debris flew more than 100 yards and damaged the tracks of the main rail line on the Washington side of the Columbia River. Burlington Northern Santa Fe spokesman Gus Melonas said more than 40 trains were delayed until the repairs were completed Tuesday afternoon and normal traffic was restored,

LNG leaking out of the bottom of the tank through a pipe of less than one inch in diameter was stopped Tuesday afternoon when crews were able to shut off a valve, Benton County District Fire Chief Rolland Watts said. Vaporized gas was still leaking from a gash in the outer wall of the 1.2 billion cubic foot storage tank, and blowing away on the wind, presenting little danger. Major piping is all underground and was not damaged.

Swaner said the facility remains offline, and workers have not determined yet whether the stainless steel inner wall of the LNG tank was breached.

The facility supplies gas during times of high demand in winter to a pipeline that serves Cascade Natural Gas customers in Washington and Oregon. Swaner said there have been no interruptions to gas deliveries.

Meanwhile, sheriff's deputies, firefighters and an incident command team have all left the area, and the evacuation order imposed Monday was lifted Tuesday.