The new leader of North Dakota's oil-rich Three Affiliated Tribes is pledging to speed negotiations on a proposed pipeline through tribal land that would curb the wasteful burning of natural gas in the state by more than 10 percent. North Dakota's booming oil production has led to an... 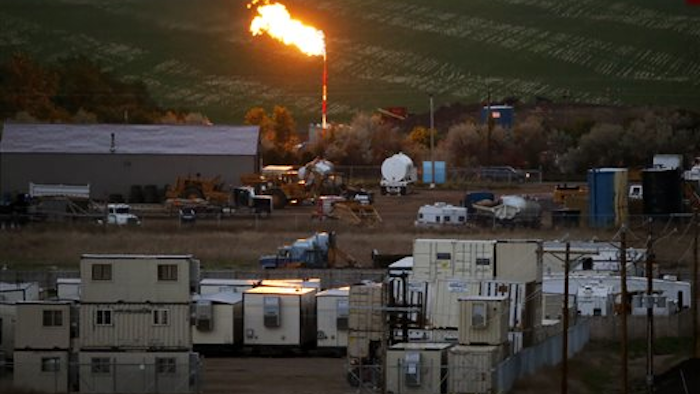 The new leader of North Dakota's oil-rich Three Affiliated Tribes is pledging to speed negotiations on a proposed pipeline through tribal land that would curb the wasteful burning of natural gas in the state by more than 10 percent.

North Dakota's booming oil production has led to an unmanageable increase in the state's output of natural gas, which is a byproduct of oil production. Oneok Inc., the biggest operator of natural gas pipelines and processing plants in North Dakota, wants to build a 20-mile-long pipeline to capture natural gas from oil wells in Dunn County and move it to an existing pipeline network nearby. But the Three Affiliated Tribes has demanded environmental assurances and cash for permission for it to pass through land it recently acquired.

Tribal leaders and Oneok have been negotiating for about a year, according to Brad Borror, spokesman for the Tulsa, Oklahoma-based company.

Mark Fox, who was elected chairman of the Three Affiliated Tribes earlier this month, said he will get a deal done. Fox, the tribe's former tax director, said he's a "proven" negotiator.

"I will figure out a way to sit down with industry," Fox told The Associated Press. "We don't need to be flaring, and we can find an economic benefit to this natural gas."

Neither Fox nor Oneok would disclose details of the negotiations.

About a third of the state's natural gas production is burned off because the pipeline network needed to transport the fuel to processing plants is not fully developed. Oil production on the Fort Berthold Reservation accounts for about a third of the state's oil daily output of nearly 1.2 million barrels, and state officials say the reservation accounts for more than 30 percent of flaring in North Dakota.

Oneok has permission for the pipeline everywhere else along the route, Borror said. Just a 1.8-mile stretch is in an area belonging to the tribe.

Fox also told the AP that the tribe plans to back off a proposal to require companies to pay royalties for flaring natural gas to compensate for lost revenue from the fuel. Industry officials have questioned whether the tribe has the jurisdiction to impose such fees and warned the change could slow oil production on the reservation.

The reservation, which spans a million acres, is home to the Mandan, Hidatsa and Arikara tribes. The land where the pipeline would be routed is not part of the reservation's original boundaries; the tribe purchased it within the last few years from former Democratic state Rep. Shirley Meyer and her husband, Dean, who ranched in the area.

Oneok's only other option is to route the pipeline through U.S. Forest Service land, a process that could take years.

A similar natural gas pipeline near Tioga that would capture and move 50 million cubic feet of natural gas daily has been under review by federal regulators since mid-2013 because a mile of it crosses federal land, the state's top oil regulators said.

"We have a very aggressive plan to reduce flaring, but we have very much run into these barriers that are way outside state control," Lynn Helms, director of the state Department of Mineral Resources. "It's very frustrating."

The groups claim that officials underestimated the plan's harm to local wildlife.
Nov 19th, 2020
Follow Us
Most Recent