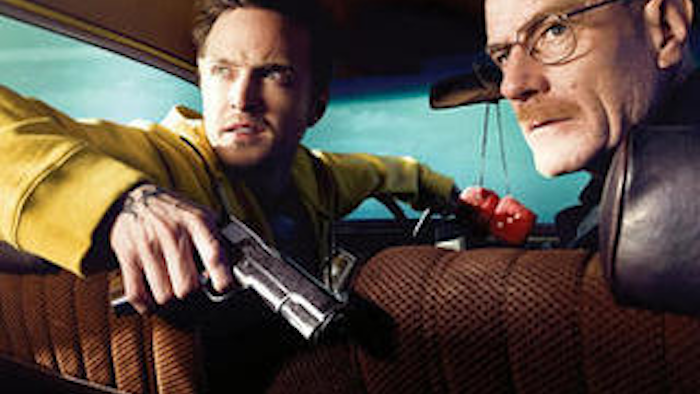 You probably didn’t know it at the time, but if you were a fan of the hit-show “Breaking Bad,” you were also enjoying the work of Dr. Donna Nelson.

The phenomenon AMC series followed a high school chemistry teacher who’s diagnosed with terminal cancer and then starts producing and selling the drug methamphetamine to secure a financial future for his family.

A few episodes into its first season, Nelson read an interview with the show’s producer, Vince Gilligan, where he mentioned that they wanted to get the science of the show right, but none of the writers had a science background. So Nelson offered her expertise and was brought on board as the show’s chemistry advisor.

During a keynote speech at the SAP For Chemicals conference, Nelson discussed why this opportunity wasn’t just a way for her to help the show portray chemistry accurately — it was her chance to be a part of a something that showed how cool science can be.

In case you never watched “Breaking Bad” allow me to set the scene: Sometimes the main character, Walt, could be seen giving a lesson on the importance of chemistry to his students. But for much of the show he was tasked with solving problems only a drug dealer would face, such as: making a meth lab inside a Winnebago, scoring large amounts of methylamine to make the purest form of meth, or finding the best container to use when dissolving bodies in hydrofluoric acid, as witnessed in the infamous bathtub scene. (The answer, by the way, is plastic.)

One of the examples Nelson gave for how she advised on the show was when they sent her a script for a lecture Walt was giving his students on alkaline. Nelson not only checked the science of his lessons, she suggested alkaline structures he might have had on the blackboard which then appeared on the show in a scene similar to this:

She also encountered an issue she didn’t anticipate. After they asked her for suggestions on the P2P method (or, synthesizing meth using phenylacetone) she gave them a list of possible reducing agents. Their pick? The reducing agent that was easiest for the actors to say: aluminum mercury.

Even with the show’s commitment to the geeky details, there were a few times the writers chose to wield artistic license. Walter’s signature blue-colored meth wouldn’t have been possible, for example. Likewise for the bathtub scene, Nelson said, which was shot before she started working on the show.

Nevertheless, the experience gave Nelson the chance to help promote the power of chemistry to the masses. It’s a mission she is continuing in her new role as the president-elect of the American Chemical Society, the world’s largest scientific society and nonprofit source of scientific information.

After her SAP For Chemicals keynote, Nelson sat down with Chem.Info for an exclusive interview to discuss the future of the chemical industry and ACS.

What is the biggest challenge for chemical industry?

Jobs. We surveyed ACS members and they said the No. 1 issue is the skills gap and mismatch between job seekers and available jobs.

What role will ACS take to combat that problem?

I’ve created a task force and we’re going to see if we can come up with some solutions. Many of people have been working on this and not a lot has improved, because it’s such a difficult problem. It has so many facets. And there’s a lot of urgency to this problem.

What can be done to improve the public perception of scientists?

Partner with Hollywood. I have already been telling ACS members that they need to offer to give talks on themselves or on what they do to places like a Chamber of Commerce, or for organizations that are usually looking for good speakers. They can make more contact with their communities, or work with Congress more.

I have already gone in and started talking with the staff of the Congressional committees and asking their opinions. And you know sort of trying to find out what they see is the current state of this. I don’t know that anyone has done that before.

I’ve also mentioned expanding the definition of chemistry to include oil and gas.

The message in particular is this: Get the public to appreciate scientists. Because science has increased their standard of living. ACS members can help the public recognize the benefits they have and will continue to have if scientists thrive in the future.

What role can ACS play in the political space when tackling hot-button issues such as climate change, GMOs, etc.?

Providing expertise. For many of these issues, climate change included, there’s some non-scientists involved and there’s some mud-slinging. I don’t think it makes scientists look good. ACS has about 160,000 members and many are experts, so we do have experts in many of those areas.

Are scientists reluctant to get involved in debates like climate change?

Yes. One of the reasons we have problems in the schools with kids learning about science is because the teachers are uncomfortable with science. By the same token, scientists are often very uncomfortable talking to public relations people or the media. Scientists don’t really like controversy that much. We have this peer review process where it’s very cordial and it’s conducted very cleanly. That’s what scientists are used to. Is getting ACS more involved in these debates going to make you a controversial leader? I don’t know if I myself am going to be involved. I’m not an expert on everything. But hopefully we’ll be able to find ACS members to step forward and make a comment. And hopefully they’ll have a calming influence.