Royal Dutch Shell PLC will move forward with drilling off Alaska's northwest coast if it can obtain permits it needs and drill safely, its chief executive officer said Thursday. Speaking in London on the company's fourth-quarter earnings, Ben van Beurden said Shell will move forward with its plan to use two drill vessels... 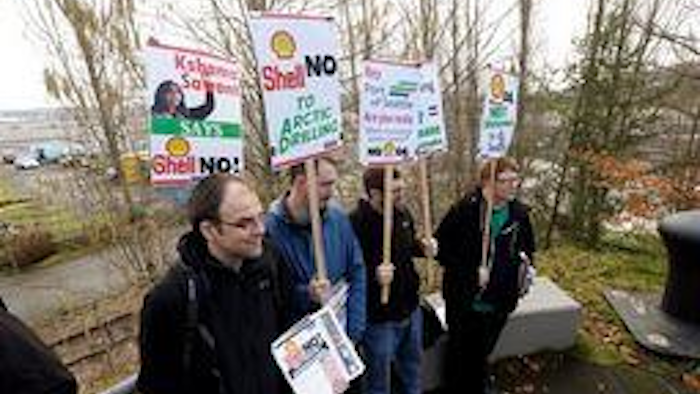 Royal Dutch Shell PLC will move forward with drilling off Alaska's northwest coast if it can obtain permits it needs and drill safely, its chief executive officer said Thursday.

Speaking in London on the company's fourth-quarter earnings, Ben van Beurden said Shell will move forward with its plan to use two drill vessels in the Chukchi Sea, subject to getting permits and legal clearance.

"There's a few other challenges that are being worked, that can - again - hold us up this year," he said in response to questions. "But, provided that doesn't happen, we have the permits in place and we are operational ready, yes, we are minded to drill this year, in the Chukchi."

The announcement was consistent with what Shell officials have been saying about the upcoming summer open-water season in Alaska.

Drilling off Alaska's shore is strongly opposed by environmental groups and some Alaska Native groups, which contend the industry has not demonstrated it can clean up a spill in ice-choked, cold waters far from infrastructure such as major ports and airports.

"No oil company should be drilling in the Arctic Ocean when there are no proven ways to do it safely and no viable means for cleaning up potential spills," said Margaret Williams, director of U.S. Arctic programs for the World Wildlife Fund, in a statement.

Shell's drill ships would be accompanied by a flotilla of support vessels that the company says could quickly stop a blowout and contain a spill.

Shell last drilled in Arctic waters off Alaska in 2012. One drill vessel afterward, the Kulluk, broke free from tow lines while attempting to cross the Gulf of Alaska and ran aground off an island near Kodiak. The contracting company on a second vessel, the Noble Discoverer, was convicted of eight environmental and maritime crimes and fined $12.2 million.

The company paused a year ago, van Beurden said, because of a legal challenge it could not overcome. Drilling in 2015 will depend on a number of things.

"First of all, will we be technically, logistically ready to go ahead? I'd be so disappointed if we wouldn't," he said.

Shell has kept all its capability in place, tuned it, and upgraded it to be ready for the upcoming summer open-water season, he said. However, the company lacks key permits, van Beurden said.

"So, if we don't get the permits, or if the permits are not acceptable and not compliable, we will have no option but to 'not' go ahead," he said.

He expects a timely resolution to a lawsuit that challenged the federal government's environmental assessment of the effects of drilling before it sold Chukchi leases to Shell and other companies in 2008. The Bureau of Ocean and Energy Management in October released a revised environmental report that must pass judicial review.

"Even if we don't drill, it will be approaching a billion dollars, because of the commitment to keep the fleet of ships that we need," he said. "Remember, this is a logistics operation as much as drilling. Ensuring that the logistics are in place to support the drilling means that quite a lot of spend is already committed."