Ballot Fight Over Fracking Could be Shaping up in Colorado

Environmentalists and the energy industry have fought decisive battles over fracking in New York, Oklahoma and Texas, but the outcome is unclear in Colorado, where the issue could go to a ballot fight in the 2016 election. 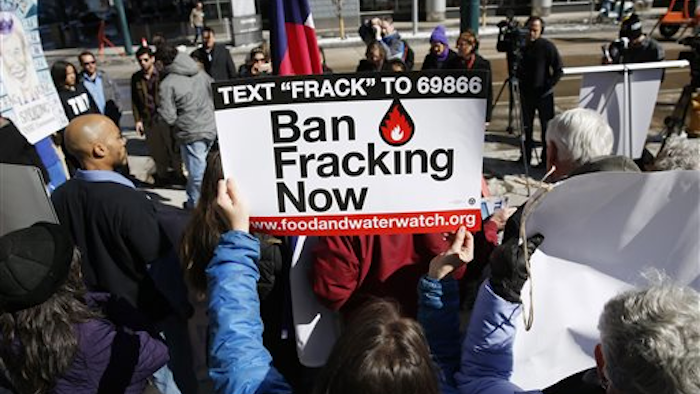 DENVER (AP) — Environmentalists and the energy industry have fought decisive battles over fracking in New York, Oklahoma and Texas, but the outcome is unclear in Colorado, where the issue could go to a ballot fight in the 2016 election.

A task force convened by Colorado Gov. John Hickenlooper tried to find a compromise over who should regulate the industry — the state or local government — and to what extent. But fracking critics were bitterly disappointed when the panel suggested leaving regulatory power in state hands and avoided recommending specific health, environmental and safety rules.

"I think the fossil fuels industry won," said Karen Dike, a member of Coloradans Against Fracking.

Fracking is a pressing issue in Colorado, the nation's No. 7 energy-producing state. Along the urban Front Range, expanding suburbs and booming oilfields are running into each other, and drilling rigs sometimes show up near public schools. Several municipal attempts to ban fracking have failed, and the industry warns that local control would stifle energy development.

Dike and others won't say whether they plan to put measures that would restrict fracking on the 2016 ballot, but they don't rule it out.

Frank McNulty, a Republican former state lawmaker who sponsored a pro-industry ballot measure in 2014, expects fracking opponents to turn to voters next year.

Fracking, or hydraulic fracturing, injects water, sand and chemicals under high pressure to crack open underground formations and make it easier to recover oil and gas. The industry says it's safe.

In May, the industry prevailed in Texas and Oklahoma, where new state laws prevent local governments from banning fracking.

Colorado hasn't imposed sweeping measures favoring either side, in part because of a nearly even three-way electoral split among Republican, Democratic and unaffiliated voters.

Colorado has plenty of advocates on opposite ends of the argument, but "also a very sizable middle ground, people who are willing to talk through it," said Christopher Weible, an associate professor at the University of Colorado-Denver School of Public Affairs who studies fracking policy debates. "Maybe it's a thing about Colorado, maybe we have a lot of pride in our natural resources and how we can get along."

After five months of meetings, the panel suggested giving local governments a consulting role but not the power to set their own oil and gas rules. The task force rejected proposals to require disclosure of all the chemicals used in fracking and to give surface property owners more leverage if someone else owns the minerals under their land and wants to drill.

Hickenlooper praised the recommendations, but Democratic congressman Jared Polis, who favors more restrictions, was disappointed. Polis supported ballot issues in 2014 that would have given local governments more control and required new wells to be at least 2,000 feet from houses, but withdrew them in the truce.

Polis said fracking could be on the 2016 ballot if state officials don't further regulate the industry. He stopped short of saying whether he would organize the effort, but he wants lawmakers and regulators to adopt three proposals that weren't formally recommended by the task force.

One would let local governments impose stricter rules than the Colorado Oil and Gas Conservation Commission, charged with regulating drilling statewide. Another would change the commission's role from facilitating oil and gas development to simply regulating it. The third would set up a panel to resolve disputes between energy companies and local governments or property owners before they land in court.

If opponents try to limit fracking in 2016, McNulty said he'll fight them. He co-sponsored a 2014 ballot issue to deny oil and gas tax revenues to local governments that ban drilling, but withdrew it as part of Hickenlooper's compromise.

Colorado already has some of the toughest energy regulations in the country, said Dan Haley, CEO of the Colorado Oil and Gas Association, an industry group.

"We choose to work together with communities to find solutions for concerned citizens, and not to worry about the activists who just want to put industry families on the unemployment line," he said.