Fond of Bonds: Our Chemical of The Week is Chlorine Trifluoride

It’s so hellish to deal with, the Nazis basically said, “No, thanks. We’ll stick with safer chemicals like Zyklon-B.” 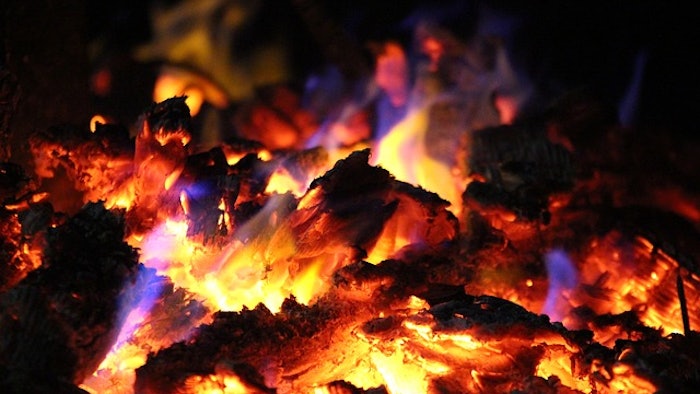 Chlorine trifluoride is not the chemical you’d want to play with in your basement lab. In fact, most chemists would put it on their “do-not-mess-with” list entirely — unless you really like flirting with danger.

First reported in 1930, chlorine trifluoride (CIF3) is an interhalogen compound that’s really good at making other substances go boom in a big way. In fact, when it reacts with other materials it can trigger an ignition that's so instantaneous no ignition delay has ever been detected. And it can make even the most non-flammable materials light up, including sand, concrete, people, rust and even asbestos — generally considered a flame retardant.

It also has a rare distinction of being more oxidizing than oxygen, meaning it can rapidly oxidize substances to set them ablaze. This is part of what makes chlorine trifluoride able to react violently with asbestos, but it also makes it capable of igniting substances that should be already burnt, dead and spent, such as coal ashes.

But even more concerning, when chlorine trifluoride comes into contact with water, it can release highly toxic gases including hydrofluoric acid and hydrochloric acid. Hydrofluoric acid is a strong inorganic acid often used in industrial manufacturing, including metal cleaning and electronics manufacturing. And when it comes into contact with your skin, it’s no joke.

After it has absorbed a bit, it starts destroying your nerves and bones and can ultimately cause cardiac arrest when it gets into your blood stream. In fact, in 1994 a lab technician in Australia accidentally spilled hydrofluoric acid on his lap and despite immediately executing safety procedures including hosing off, immersing himself in a swimming pool, and later extensive medical care (including needing to have one of his legs amputated), within two weeks of the accident, he was dead.

If you’re thinking by now that chlorine trifluoride sounds like it would make a good weapon, you’re not the first. The Nazis explored using it in self-igniting flamethrowers and managed to successfully produce it in a secret facility. But ultimately they found the chemical too hellish to deal with basically said, “No thanks, we’ll stick with safer chemicals like Zyklon-B.”

Part of the problem was that it’s difficult — to put it lightly —  to haul around. Because it is corrosive to metal, chlorine trifluoride has to be stored in containers treated with fluorine gas, and if that lining is compromised … well, it was nice knowing you.

But, there’s still a place in the world for chlorine trifluoride. When it’s shipped and stored, chlorine trifluoride is compressed into a light greenish-yellow liquefied gas that smells a tad like bleach. According to Gizmodo, the chemical could be made on the cheap (one study estimated a kilo of chlorine trifluoride could be sold for about a dollar) but because it’s not mass produced, 50 grams sets you back about $400.

Today it’s used to clean process chambers from the manufacturing of semiconductors, because it has a few distinct advantages: Unlike other chemicals, it can react with the heat of the chamber easily to decompose the semiconductor material, without needing to take apart the chamber for cleaning. It’s also used for producing uranium hexafluoride for nuclear fuel processing.

The use of chlorine trifluoride as a high-performance oxidizer in rocket propellant systems was also explored. But engineers ultimately abandoned the idea because of the difficulty of storing it, along with the chance of spraying it everywhere in the event of an accident. In fact, John Drury Clark famously declared that when dealing with chlorine trifluoride and all of the possible explosions it can set off, you better have “a good pair of running shoes.”

Have an idea for a “Chemical of The Week?” Shout out to Meagan.Parrish@advantagemedia.com or Tweet me @MeaganChemInfo.