Crediting coal-miners for having "created an industrial revolution," Clinton said "it is important that we help them transition to a new economy." 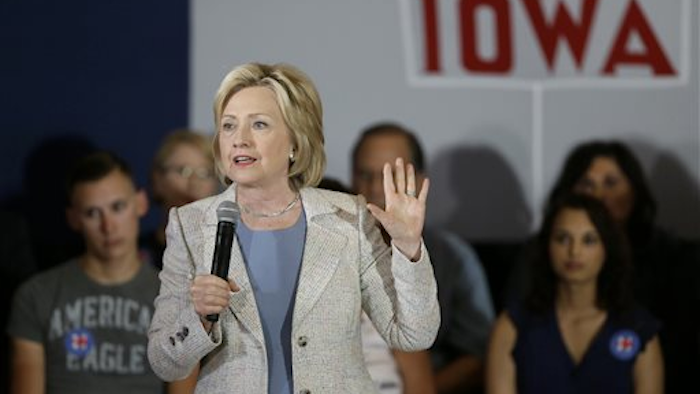 Addressing this issue Sunday, Clinton touted a program that would combat climate change at least in part by changing the tax code to promote renewable energy.

"This is not complicated folks," the former secretary of state told more than 200 people at Iowa State University. "I'm just a grandmother with two eyes and a brain. And I know we're facing huge problem."

Climate change has become a key issue in the Democratic presidential primary, where Clinton is the heavy favorite.

Clinton was scheduled to discuss the plan in detail during a public event in Des Moines Monday morning.

Billionaire Tom Steyer has led an effort to promote the issue. The California-based Steyer hosted a fundraiser for Clinton in May.

Clinton proposes, through tax incentives, to increase the amount of power derived from renewable sources to support every home in the United States within 10 years.

For instance, Clinton said she supports renewing the wind energy tax credit as part of over time shifting the U.S. energy system from one based on fossil fuels.

"We need to get the incentives fixed in our tax system which as you know are too heavily weighted toward fossil fuels," Clinton said during a day of campaigning in central Iowa.

Clinton also hinted that her plans would impose changes on the coal industry, though she also pledged the government's help for workers to make the transition.

Weaning the country off of coal is a tricky political position in key places on the political battleground map. Southeast Ohio and western Pennsylvania are regions of states that have been pivotal in recent elections. And they remain the home of key coal-producing areas.

Crediting coal-miners for having "created an industrial revolution," Clinton said "it is important that we help them transition to a new economy."

It would also increase capacity to the nation's power grid with a combination of renewable energy sources such as wind, solar, hydroelectric and geothermal.

The plan's estimated cost is about $60 billion over 10 years, and would be paid for by eliminating tax breaks for the oil and gas industry, Clinton spokesman Brian Fallon said.

Former Maryland Gov. Martin O'Malley, also seeking the 2016 Democratic presidential nomination, noted Sunday that he unveiled a climate change plan in Iowa that addresses not just consumer energy use, but industrial and transportation, as well.

As governor, O'Malley doubled Maryland's renewable fuel production, and reduced greenhouse gases in the state by 10 percent during his two terms.