EPA: No Word Yet on Health Risk From Colorado Mine Spill

The mustard-colored muck that spilled into a river from a shuttered Colorado gold mine contains heavy metals including lead and arsenic, but it's too early to know whether they pose a health risk, federal environmental officials said Friday. 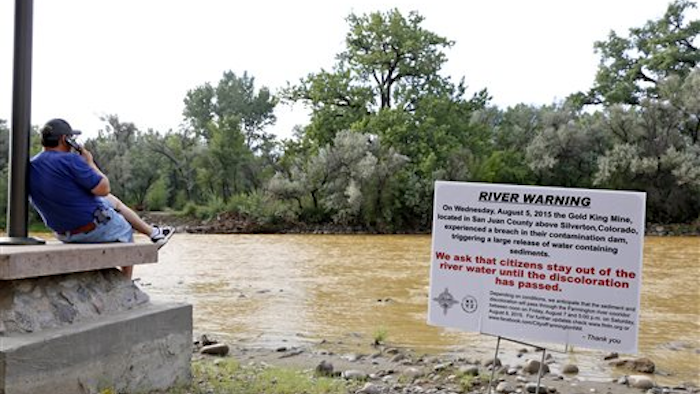 DENVER (AP) — The mustard-colored muck that spilled into a river from a shuttered Colorado gold mine contains heavy metals including lead and arsenic, but it's too early to know whether they pose a health risk, federal environmental officials said Friday.

No health hazard has been detected but the tests were still being analyzed, said Joan Card, an adviser to Environmental Protection Agency Regional Director Shaun McGrath.

The spill also contained cadmium, aluminum, copper and calcium, the EPA said. The concentrations were not yet known.

At least two of the heavy metals can be lethal for humans in long-term exposure. Arsenic at high levels can cause blindness, paralysis and cancer. Lead poisoning can create muscle and vision problems for adults, harm development in fetuses and lead to kidney disease, developmental problems and sometimes death in children, the agency said.

The sludge is creeping toward communities in northern New Mexico, where tests also were being done. But the EPA says no information has been released yet.

An EPA-supervised cleanup crew accidentally unleashed 1 million gallons of the wastewater from the mine on Wednesday, and it flowed into the Animas river through a tributary. The EPA warned people to stay out of the river, which is popular with boaters and anglers, and to keep domestic animals from drinking from it.

No drinking-water contamination was reported. At least seven water utilities shut down their intake valves ahead of the plume to keep it out of their systems. Farmers also closed the gates on their irrigation ditches to protect their crops.

Many in southwest Colorado regarded the EPA's initial response to the spill as too slow and too small, Colorado's lawmakers in Washington noted in a letter Friday to EPA administrator Gina McCarthy.

The spill threatens not only public health but the area's agriculture and tourism, U.S. Sens. Michael Bennet, a Democrat, and Cory Gardner, a Republican, wrote, along with Republican U.S. Rep. Scott Tipton, whose district includes the area of the spill.

"We urge the EPA to take full responsibility for this accident," the Colorado lawmakers wrote. That includes with compensation to the communities hit by the yellow-orange surge of water, they said.

Colorado officials put 108 young trout in cages in the river to test the effects, and one died within the first 24 hours. It was too soon to draw any conclusions, Colorado Parks and Wildlife spokesman Joe Lewandowski said.

Water was still spilling from the mine Friday but officials didn't know how fast. Crews were building containment ponds to catch it.

Card said the EPA has no way to get the discolored water out of the river and that it will eventually dissipate. It wasn't clear when that will happen.

Some of the heavy metals likely are settling to the bottom of the river or on beaches, Card said. Tests will be done to see if cleanup work should be done, said Martin Hestmark, an ecosystem remediation and protection administrator for the EPA.

New Mexico officials were angry they were not told of the spill until Thursday, nearly a day after it occurred.

McGrath apologized for the EPA's response and for previously sounding "cavalier" about the concerns for public health and the environment.

"Our initial response to it was not appropriate in that we did not understand the full extent of what we were looking at here," he said.

Few details have been released about the spill, except that the cleanup crew of EPA employees and contractors accidentally breached a debris dam that had formed inside the mine. The crew was trying to enter the mine to pump out and treat the water, EPA spokeswoman Lisa McClain-Vanderpool said.

The mine has been inactive since 1923.

The waste spilled into Cement Creek, which flows into the Animas River north of the historic mining town of Silverton in Colorado's San Juan Mountains.

The river is a recreational destination and served as the backdrop for parts of the movie "Butch Cassidy and the Sundance Kid." Passengers on the Durango and Silverton Narrow Gauge Railroad snap thousands of photos of the waterway as the steam-powered trains chug up the narrow canyon beside it.

"It's such a shame, it's such a beautiful river," said Jeff McCoy, who was watching from the riverbank in Durango, where he was on a fishing trip with his son.

"We usually come out here in the beautiful weather to fish, but no fishing today," said McCoy, who lives in Phoenix.

The plume was expected to reach the northern New Mexico cities of Aztec and Farmington by Friday evening. After the Animas joins the San Juan River in New Mexico, the remnants of the spill would then go into Utah, eventually reaching Lake Powell and the Colorado River.

Officials said the contamination would likely settle into sediment in Lake Powell. Glen Canyon National Recreation Area officials said visitors will be warned starting Monday to avoid drinking, swimming or boating on affected stretches of the lake and river until further notice.

The river had begun to clear up in Silverton, McClain-Vanderpool said. Officials were releasing extra water from at least one reservoir to help dilute the pollution.