The Next Step Towards Wearable Energy

What happens when a chemist and a textile artist come together? Something pretty cool. 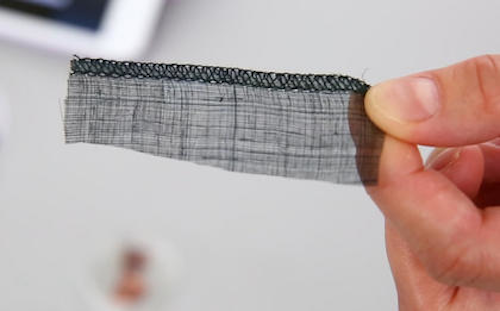 What happens when a chemist and a textile artist come together? Something pretty cool.

At the University of Wisconsin-Madison, Marianna Fairbanks, who has decades of experience working with dyes and fibers, and Trisha Andrew, an assistant professor of chemistry, have joined forces to see if they can innovate the next wearable tech revolution: solar textiles.

They’re not the first to come up with the idea of solar textiles, but they have been successful in overcoming challenges to manufacturing it on a large scale.

With research grants from the UW and the help of grad student Lushuai Zhang, their efforts have focused on coating different weave types with a polymer to increase its conductivity by using vapor phase chemistry.

According to the UW: “Once the weave is at least 10 times more conductive than it was before coating, the fabric will act as the bottom electrode on which Zhang will deposit two different dyes and a top electrode — the contact between the four deposits making up a complete and functional solar cell.”

Fairbanks then used her weaving expertise to devise a way to turn the component cells into a functioning textile. First they spooled thread around the components. Then the team wove those threads together — two electrodes and two dyes — which in the end, creates contact points in the cross-sections.

"I thought that was brilliant," Andrew says. "I never would've thought of that. If we could literally weave together a solar cell: mind blowing. We're really integrating each step of the process, on the textile side, on the device side."

The team says the next step is to create a prototype. And they believe they’re on the cusp of generating a new type of wearable energy that could have applications in defense technology, remote camping and more.