Petroleum developers would be required to disclose to regulators the ingredients in the chemical products they use to improve the results of fracking. 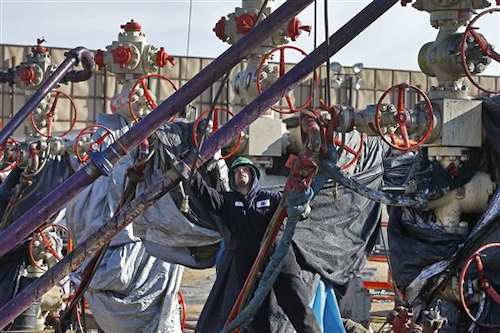 CHEYENNE, Wyo. (AP) — A judge on Wednesday blocked new nationwide regulations for oil and gas drilling on federal lands from taking effect while a lawsuit moves ahead, pointing to a law that prohibits the U.S. Environmental Protection Agency from regulating hydraulic fracturing.

Just because the EPA lacks authority to regulate fracking doesn't mean the U.S. Bureau of Land Management has leeway to do so, U.S. District Judge Scott Skavdahl wrote. "In the absence of a statute conferring authority, an administrative agency has none," he wrote.

The preliminary injunction means the already postponed rules might not take effect for years, if at all. Skavdahl found the rules' opponents likely will prevail on the merits of their arguments.

The Bureau of Land Management announced the rules in March. Areas covered include fracking — the process of cracking open oil and gas-bearing rock with a mix of pressurized water, sand and chemicals — and pressure-testing well bores to make sure they won't leak.

Petroleum developers would be required to disclose to regulators the ingredients in the chemical products they use to improve the results of fracking.

Two petroleum industry groups, the Ute Tribe and four states — Wyoming, Colorado, Utah and North Dakota — seek to block the rules, saying they duplicate state regulations and would cost jobs. Environmentalists siding with the government say they would protect water, land and wildlife.

Skavdahl temporarily barred the rules hours before they were set to take effect in June, saying he wanted federal attorneys to submit more information about how Bureau of Land Management developed them. The Western Energy Alliance and the Independent Petroleum Association of America welcomed the latest order in their favor.

"Vague notions of public concern are not a sufficient basis to impose centralized federal control. BLM provided no evidence that its rule is necessary or that state regulation is not already protecting the environment," alliance Vice President Kathleen Sgamma said in a release.

Key to Skavdahl's order was the 2005 Energy Policy Act, which put regulation of fracking beyond the purview of the EPA. No other federal agency has undertaken fracking regulation since then. "It is hard to analytically conclude or infer that having expressly removed the regulatory authority from EPA, Congress intended to vest it in the BLM," Skavdahl wrote.