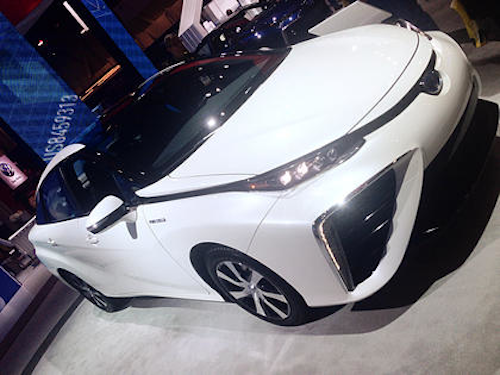 Federal researchers believe that a newly developed metal material could help dramatically reduce the cost of fuel for cars powered by hydrogen.

The study, published in the journal Nature Communications, found that the altered metal produced four times the amount of hydrogen as any previous hydrogen extraction from water.

Molybdenum disulfide, the researchers hope, could eventually match platinum's capabilities as a hydrogen catalyst at a tiny fraction of the cost. Molly costs roughly 37 cents per gram; platinum runs about $1,500 per gram.

Sandia researchers also said that the molly reaction can be triggered by sunlight, would could one day allow users to produce hydrogen fuel free from the electrical grid.

Critics, including Telsa's Elon Musk, previously suggested that hydrogen would be an inefficient source of energy. A cheaper catalyst, however, could go a long way toward resolving those concerns.

"There are many intricacies to be worked out," said study co-author Bryan Kaehr. "But getting inexpensive molly to work this much more efficiently could drive hydrogen production costs way down."