Just touching flooded water can lead to health problems due to the presence of oil, chemicals and even sewage. 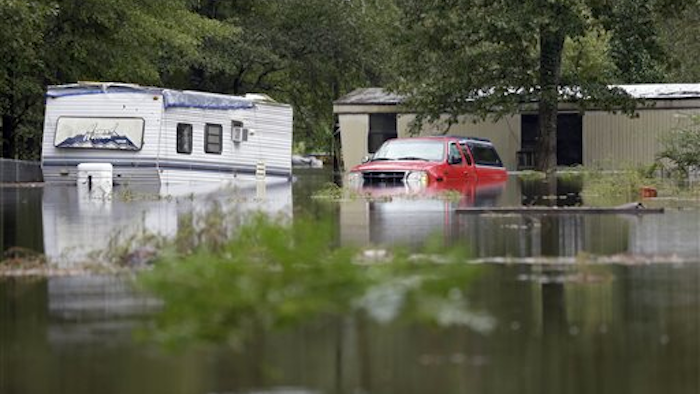 COLUMBIA, S.C. (AP) — Many areas in South Carolina's capital city - a metropolitan area home to more than 800,000 - have been covered by record amounts of water this week in historic flooding. The rain subsided, but as families returned to their homes to assess damage, officials warned them about health-related problems, too.

People served by the City of Columbia's water system - 375,000 in all - have been advised for several days to boil all water before drinking or cooking with it due to pipeline ruptures throughout the system. This process can kill most disease-causing microorganisms that may be present in the water. Using regular, unscented bleach can also decontaminate the water if boiling isn't an option.

Drinking infected water can cause illness similar to food poisoning, with symptoms like nausea, diarrhea, cramps and mild fever, according to the Centers for Disease Control and Prevention. As with any illness, health officials advise that staying hydrated - by drinking clean, disinfected water - is the best remedy.

Just touching flooded water can lead to health problems, too, due to the presence of oil, chemicals and even sewage. According to the CDC, anyone who comes in direct contact with flood water should wash their hands with soap and clean water as soon as possible.

Many in the Columbia area have been forced to evacuate their homes, wading through flooded areas to get to safety. Health officials advise allowing skin - especially feet - to dry out fully in order to avoid ailments like trench foot, which occurs when feet are wet for long periods of time.

Flooded-over areas can also hide hazards like utility boxes, tree debris and even vehicles. Department of Transportation officials have blocked off hundreds of roads and bridges across the state, including a 75-mile swath of Interstate 95, to keep people from encountering such dangers.

People returning to their homes for cleanup and repair can also suffer falls, bruises and broken bones, as many did in the aftermath of Hurricane Katrine a decade ago.

Perhaps the longest-lingering hazard after a flood is mold, which flourishes in the wood and sheet rock of buildings. Mold can pose respiratory and skin issues, particularly in people with weakened immune systems or mold allergies.

According to the CDC, mold grows best in damp, warm environments, like the inside of a previously flooded home in a warm climate like South Carolina. Prolonged exposure to high levels of mold can produce an immune-mediated disease known as hypersensitivity pneumonitis, while long-term ingesting of mold toxins can possibly lead to cancer.

The best way to treat mold-infestations, according to health officials, is to dry out affected areas and throw out furniture, draperies and carpeting. Clothing and stuffed animals can be cleaned in hot water.

After Hurricane Katrina, there were dire predictions of disease outbreaks from contaminated floodwaters, unsanitary living conditions and mosquitoes breeding in the hot and humid coastal climate, but those issues never materialized.