China Wins Long-Sought Nobel Prize in One of The Sciences

For decades, China has yearned for a Nobel Prize in science. Now, a little-known researcher who helped develop a malaria medicine in a secret military project to assist Vietnam in its war against the U.S. has finally won Beijing that honor. 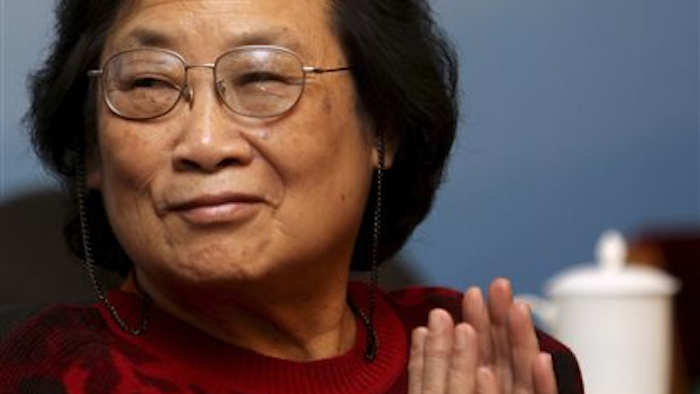 BEIJING (AP) — For decades, China has yearned for a Nobel Prize in science. Now, a little-known researcher who helped develop a malaria medicine in a secret military project to assist Vietnam in its war against the U.S. has finally won Beijing that honor.

Tu Youyou (pronounced "TOO yoyo"), 84, who shared a medical Nobel for her work in isolating an anti-malaria medicine inspired by an ancient Chinese remedy, also became the country's first woman to win any Nobel prize.

Until the Monday announcement, Tu had never achieved much public acclaim in China for her part in the 1971 discovery, and never was accepted into the country's prestigious national academy of science despite several attempts. But her breakthrough with the Nobel has drawn jubilant congratulations, sent her name trending on social media and drawn praise for the country's medical research.

Premier Li Keqiang congratulated Tu for winning the award, as did Vice Premier Liu Yandong, who is in charge of China's education, science and research.

The award also has revived memories of a time when collective action was paramount in China, and has raised questions about how much the single researcher should be credited for work that was part of a massive government project.

Tu appeared on state broadcaster CCTV to say the award was a "great honor," while declining to take all of the credit for her work in discovering artemisinin and dihydroartemisinin, extracted from sweet wormwood, or Artemesia annua.

"The successful finding of artemisinin is the collective achievement of the research team, and it is a collective honor for all Chinese scientists," Tu said.

As a junior researcher, Tu was recruited by the Chinese government to work on a secretive military project in 1969 to find anti-malaria drugs.

Known as Project 523, it was launched two years earlier at the request of North Vietnam, which was at war with the United States but losing its soldiers to the disease.

The project also coincided with China's Cultural Revolution, when intellectuals were belittled and education and research trampled on.

Tu and her teammates combed through ancient medicine books, herbal therapies and folk remedies before they compiled 640 medical treatments.

The team conducted research on more than 200 of the herbal medicines and later focused on sweet wormwood — a remedy cited originally in a Chinese text by the fourth century pharmacist Ge Hong. They found that a compound extracted from the wormwood was effective in treating malaria.

The team later purified the compound in crystal forms, which came to be known as artemisinin.

As a group leader, Tu got to report on the findings, which were deemed collective work without having credit assigned to individual researchers.

In 2007, two researchers at the U.S. National Institutes of Health delved into the history of the discovery of artemisinin and concluded that the major credit should go to Tu, who realized that high-temperature extractions could damage the active ingredient and switched instead to ether extraction at lower temperatures.

Tu also was credited with ensuring that the extract was neutral and not acidic, which was more effective in fighting malaria, according to a 2011 article by Louis Miller and Xinzhuan Su in the journal Cell.

In 2011, Tu was honored with the Lasker-DeBakey Clinical Medical Research Award for discovering artemisinin.

At the time, it drew disagreements from some Chinese scientists, who thought that the discovery of artemisinin was teamwork and that other researchers were unfairly ignored for their contributions.

Three scientists, including Rao Yi of Peking University, also conducted a review of documents, files and publications related to Project 523. They concluded that Tu's proposal for ether extraction was indeed a critical step, but also named other researchers whose contributions to the eventual finding was significant — including those who helped purify the active molecule.

Tu also had thanked her colleagues when she accepted the Lasker award four years ago.

"For this, I would also like to express my great appreciation and thanks to my Chinese colleagues who made significant contributions to the discovery and clinical application" of artemisinin, she said.