Gulf coral damage from the massive BP oil spill is more extensive than previously thought, according to a new study that revealed sick and dying corals in the rich, deep-water environment off the coasts of Alabama and Mississippi known as the Pinnacles. 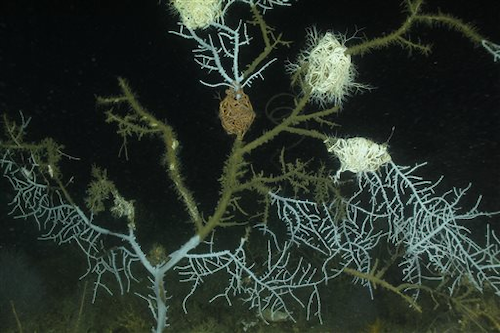 NEW ORLEANS (AP) — Gulf coral damage from the massive BP oil spill is more extensive than previously thought, according to a new study that revealed sick and dying corals in the rich, deep-water environment off the coasts of Alabama and Mississippi known as the Pinnacles.

Using remotely operated submarines, researchers explored the Pinnacle Reef in September 2011 and found more than 400 coral colonies were injured. Corals — such as sea whips, sea fans and black corals — were covered in a scum of dead tissues and oily residue. Some showed severe damage, such as bare skeletons and missing branches.

These colonies are found about 35 miles to 68 miles to the north of BP PLC's blown-out well, which spewed more than 130 million gallons of oil into the Gulf of Mexico in 2010. Previous discoveries of coral damage were found south of the BP well and in much deeper water. The coral in the Pinnacles live about 200 feet under the water surface.

The Pinnacles is a rocky outcropping on the Continental Shelf about 70 miles off the coasts of Mississippi and Alabama.

The study was conducted by a team of Florida State University researchers and federal scientists with the National Oceanic and Atmospheric Administration. It was also done as part of the work to assess damage from the spill, the so-called natural resources damage assessment. The study is set to be published in Deep-Sea Research, an oceanography journal.

The paper said the damaged coral showed signs of injury from an "acute, isolated event rather than ongoing natural processes." It based this conclusion on previous explorations that looked at the corals between 1997 and 1999, which found the corals were mostly healthy.

"We saw many injured colonies," said Ian MacDonald, an oceanographer at Florida State University. He is one of the authors of the study.

He believes a much larger area of the Pinnacles most likely suffered similar damage.

"The area we have looked at so far is only the tip of the iceberg," he said.

The researchers believe oil floating over the Pinnacles was sprayed with chemical dispersants, which led to oil sinking and contaminating the reef. The paper also says a tropical storm that passed over the area during summer 2010 churned up the sea and caused oil to reach the corals.

"It is a new region and a new ecosystem showing impact," said Erik Cordes, a deep-sea marine scientist familiar with the Pinnacles Reef study. He's been involved with teams looking at coral damage closer to the site of the BP blowout.

"We'll have to monitor it over time," Cordes said.

Even though more than five years have passed since the spill, scientists are still locked in studies to figure out where the oil went and what effects it had on the Gulf ecosystem.

MacDonald said one way to protect the reef from further damage would be to designate it as a protected marine sanctuary.