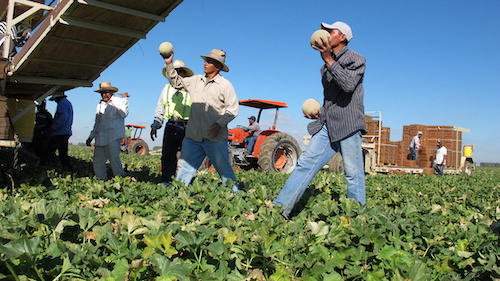 New rules announced by the EPA on Monday will bar almost anyone under 18 from handling pesticides and require buffer zones around treated fields to protect workers from drift and fumes. Farm owners and their family members would be exempt from the rules.

Under the new standards, workers would have to be trained annually on the risks of pesticides, including how to protect their families when they return home with potentially contaminated clothes and shoes. Currently they only have to be trained every five years. Farms would also be required to post signs when the most toxic pesticides are applied.

EPA Administrator Gina McCarthy said the rules are "a long time coming" and would affect millions of agricultural workers across the country.

"Farmworkers deserve to be healthy and safe while they are earning a living," she said.

The EPA says that between 1,800 and 3,000 cases of pesticide exposure are reported each year at farms, nurseries and other agricultural operations covered by the current standards. McCarthy said those rules haven't been working and that many cases of exposure aren't reported.

Fewer of these incidents would mean healthier workers and fewer lost wages, medical bills and work absences, the agency says. EPA also said it is concerned about low-level, repetitive exposure to pesticides that could contribute to chronic illness.

Farmworkers are unique in that many of the workplace protection standards issued by the Occupational Safety and Health Administration for other industries do not apply to them. Many farmworkers are migrants who move from farm to farm, making it difficult to track health problems from pesticide exposure that can develop over time.