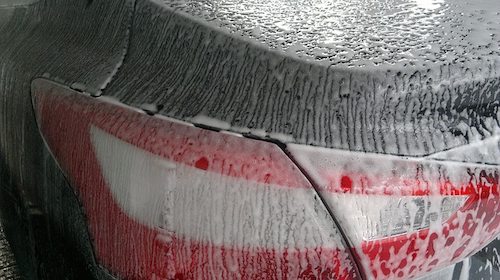 ​TUMWATER, Wash. (AP) — A chemical commonly used at commercial car and truck washes can be dangerous to workers, according to new research by the Washington Department of Labor and Industries.

The U.S. Centers for Disease Control and Prevention published a report Friday based on research from the agency, which looked at workers' compensation injury reports from 2001 to 2013. It found 48 workers suffered burns from hydrofluoric-acid-based car wash products, and one, a 38-year-old man, died after ingesting some — though it wasn't clear if the ingestion was intentional.

Hydrofluoric acid is often used in car wash products to brighten aluminum and break down road grime. The workers injured typically suffered burns to their hands, head or eyes, sometimes because they had holes in their gloves or failed to wear them at all. Seven needed to be hospitalized, three suffered third-degree burns, and two needed surgery, including skin grafts.

"Hydrofluoric acid is insidiously toxic at the low concentrations used in vehicle washing," Carolyn Whitaker, one of the researchers, said in a news release. "Initially, when it touches the skin there may be little or no pain. That means workers are often unaware of the burn until later and typically delay getting treatment."

That's what happened to one of the badly burned workers. He splashed his left leg while transferring a cleaning solution between containers, didn't wash the substance off and continued to work for about 90 minutes — with his pants and shoe soaked — before he noticed the burning sensation, the report said.

Emergency medical technicians treated him and brought him to a burn unit, but he needed a skin graft for the third-degree burns and eventually received permanent partial disability payments due to chronic numbness in the foot.

Whitaker and the department said commercial car and truck washes should use alternative products that do not include hydrofluoric acid, and when it is used, workplaces should take steps to minimize exposure, make sure employees are trained and fully aware of the serious hazard, and make sure they wear protective gear.

The chemical is also used in wheel- and boat-brightening products sold for home use, and even low concentrations can be hazardous, Labor and Industries said. The agency recommended that people use alternatives.