The Environmental Protection Agency is expected to rule this fall on Dow AgroSciences' application to market Enlist, a new version of the 2,4-D herbicide that's been around since the 1940s. It's partly a game of catch-up for the agriculture industry, as many farmers are dealing with weeds that have become resistant to glyphosate, an herbicide commonly used on corn and soybeans now. 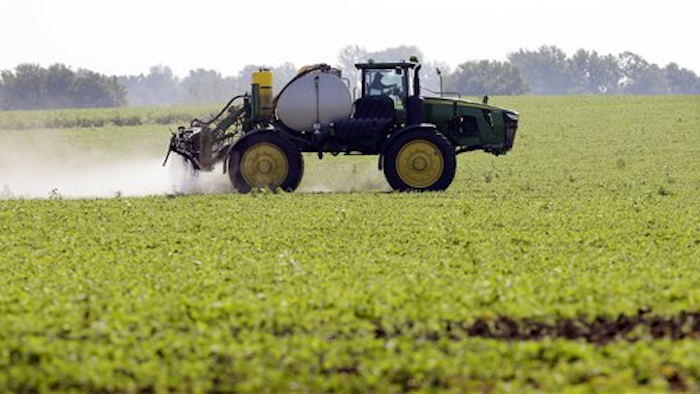 WASHINGTON (AP) — Faced with tougher and more resistant weeds, corn and soybean farmers are anxiously awaiting government decisions on a new version of a popular herbicide — and on genetically modified seeds to grow crops designed to resist it.

Critics say more study is needed on the effects of the herbicide and they are concerned it could endanger public health.

The Environmental Protection Agency is expected to rule this fall on Dow AgroSciences' application to market Enlist, a new version of the 2,4-D herbicide that's been around since the 1940s. It's partly a game of catch-up for the agriculture industry, as many farmers are dealing with weeds that have become resistant to glyphosate, an herbicide commonly used on corn and soybeans now.

If approved, the 2,4-D would be used in combination with glyphosate.

An Agriculture Department decision on the company's genetically modified seeds also is expected this fall. In the department's final environmental review released last week, the USDA recommended approval. The agency said that if both the seeds and herbicide are approved, the use of 2,4-D could increase by an estimated 200 to 600 percent by the year 2020.

Scott Faber of the Environmental Working Group said the EPA studies so far have not been comprehensive enough and need to look more closely into the effects of pesticides on children.

"This is a once-in-a-generation decision that will have a huge impact on public health, especially on farmers and rural residents," Faber said. "This is a moment to step back and ask if this is a durable weed control solution for farmers."

Damon Palmer of Dow AgroSciences says the new version has been re-engineered to solve potential problems, like drift before and after the herbicide hits the plant.

2,4-D is now used on other crops, including wheat, and on pastures and home lawns. It is the world's most popular herbicide and the third most popular in the United States, behind atrazine and glyphosate.

Most corn and soybeans grown in the U.S. are already genetically engineered. Before Monsanto's Roundup herbicide was introduced in 1976, most farmers tilled their fields prior to planting, flipping the soil over and burying the weeds to kill them. The technique also exposed tilled earth to the air, creating problems with erosion and runoff and releasing greenhouse gases.

Herbicide-resistant seeds permitted most farmers to stop tilling because they could spray fields after their plants emerged, killing the weeds but leaving crops unharmed.

Critics expressed concern that if the herbicide is approved, weeds will eventually become resistant to it, too. George Naylor, an Iowa farmer who is on the board of the advocacy group Center for Food Safety, called it a "pesticide treadmill" that needs to be slowed down. The Center for Food Safety has lobbied against expanded use of genetically modified crops and chemicals in agriculture.

Palmer of Dow AgroSciences said the company has created the new seeds with "multiple locks on the door" in an effort to avoid increased weed resistance.

In its environmental assessment, the USDA said increased resistance is a risk, and farmers will have to find ways to adapt if they find it decreases in effectiveness. The agency said it's hard to predict how that will play out, however.

"Therefore, it is difficult to accurately predict when and the extent to which 2,4-D-resistant weeds will become a problem," the USDA said.