Charleston-based Freedom Industries can expect about 5,000 groups to ask for money in bankruptcy claims over the spill, said the case's claims agent, James Lane. 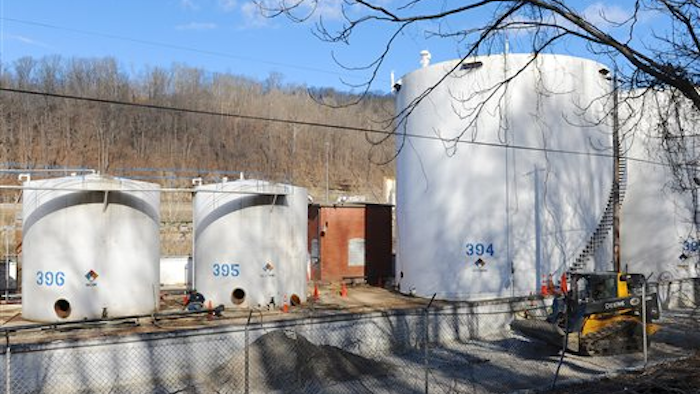 CHARLESTON, W.Va. (AP) — When coal-cleaning chemicals seeped into West Virginia's biggest water supply in January, the city of Cincinnati had a decision to make 200 miles downstream.

As the city feared, a sheet of contaminants cruised down the Elk River, into the Kanawha River and hit the Ohio River. Five days after the spill, Cincinnati stopped using the Ohio for its tap water for about two days and relied on other reserves.

In late March, Greater Cincinnati Water Works mailed a $113,484 bill to Freedom Industries for dealing with the company's spill. The invoice covered testing, worker overtime and chemical costs. The city still hasn't seen any of that money.

Cincinnati's water utility is one of thousands of agencies, businesses and people trying to squeeze millions of dollars out of a deflated, bankrupt company.

Charleston-based Freedom Industries can expect about 5,000 groups to ask for money in bankruptcy claims over the spill, said the case's claims agent, James Lane.

A wide spectrum of folks want Freedom's limited cash: state and county agencies; local eateries and big chains like McDonalds; a dog track casino and a go-kart fun center; the regional water company; and residents who say they got sick, bought a bunch of bottled water or drove out of town to find clean water.

Their lives, health, bottom lines and paychecks suffered when the spill rendered tap-water unsafe for 300,000 people for four to 10 days, the claims say. But securing money from Freedom may be a long shot.

Anthony Majestro, a Charleston lawyer representing some local businesses who sued Freedom, thinks most of the money available will come from Freedom's $3 million insurance policy. Negotiations are ongoing over how to use that money for projects benefiting the public good. Long-term health monitoring has been mentioned as a possibility.

The proposal would settle 24 lawsuits against Freedom, including a $100-million-plus claim filed by Majestro for businesses and people who sued.

The state of West Virginia is seeking $1.8 million for costs like personnel overtime, buying potable water and conducting research and studies. West Virginia American Water wants $1.1 million for switching out its water treatment filters, in addition to coverage of any damages that stem from 58 related lawsuits it faces. The company also wants Freedom to pay a $33 overdue water bill.

Mardi Gras Casino & Resort in Cross Lanes has one of the biggest single requests, claiming $16 million in lost income, supplies and employee aid.

Many claims, however, came from regular people whose lives were interrupted.

After the spill, Nitro resident Annette Kirk made 10 trips to her parents' house 42 miles away in Montgomery. She crammed the car with dirty dishes, laundry and empty jugs to fill with water. Her husband Thomas, 70-pound German shepherd and two cats also squeezed in.

The trips cost her $1,750 in gas, just to access clean water to cook, drink, bathe and do laundry.

Kirk isn't confident a check is coming her way, though.