Authorities are testing water from the San Pedro River in southern Arizona that may be contaminated with toxic waste that traveled north after a massive copper mine spill in Mexico this summer. 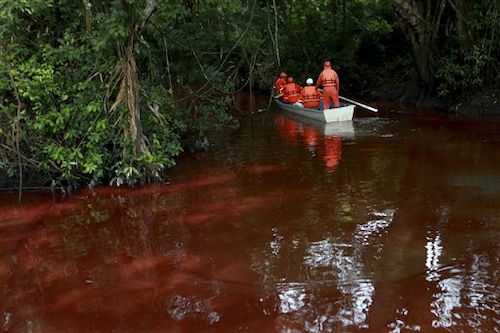 TUCSON, Ariz. (AP) — Authorities are testing water from the San Pedro River in southern Arizona that may be contaminated with toxic waste that traveled north after a massive copper mine spill in Mexico this summer.

Mexican officials on Monday issued a binational alert that contaminated water had made its way into the San Pedro River, which runs north to Pinal County in Arizona.

Officials have not said how much waste leaked, or what exactly was in the spill.

Arizona authorities say they are trying to get more information about the potential spillover.

Mike Fulton, director of the water quality division of the Arizona Department of Environmental Quality, said two investigators would take samples from the water closest to the Mexico-U.S. border on Tuesday.

Fulton said the San Pedro River is currently flooding and that obtaining samples could be dangerous. The department plans to examine the pH and metal levels of about two or three liters of sample water.

International Boundary and Water Commission spokeswoman Sally Spener said it could be days before Mexican authorities sampling the water near the border get lab results back. Samples of water from the area will also be tested to determine whether waste made it to Arizona.

Cochise County Emergency Services director Norman Sturm Jr. said water flowed over the top of a dam in Mexico on Sunday because of heavy rain, but there's little concern of massive contamination.

"From what I understand from the Mexican authorities, they doubt there is any higher level of contamination," Sturm said Monday. "But because that dam is near the mines in Cananea, I'm assuming they're just trying to be cautious."

The San Pedro runs north from Cananea, Sonora, into Arizona, past Sierra Vista and continues until it meets the Gila River near Winkleman in southern Pinal County.

Neither state nor local officials are warning the public of any contamination.

Mexican officials say the material in the water is "probably toxic."

The office of the Federal Attorney General for Environmental Protection said the spill contained rainwater overflow with ferrous elements below the threshold of what would pose a human health risk to human health. Authorities were analyzing whether it could contain heavy metals or other contaminants such as arsenic.

The Buenavista del Cobre mine, owned by Grupo Mexico, produces about 200,000 tons of copper each year.

The mine issued a statement Sunday saying storm water overflow linked to heavy rains from Hurricane Odile had caused mine water to leach into some creeks and streams.

Earlier this month, Grupo Mexico agreed to set up a $151 million trust to pay for damage when 10 million gallons of contaminants including copper sulfate and heavy metals spilled from the same mine into two rivers on Aug. 7.