With increasing numbers of volatile crude oil trains moving through Seattle's "antiquated" downtown rail tunnel, city emergency planners say more must be done to lower the risk of an oil train accident and improve the city's ability to respond. 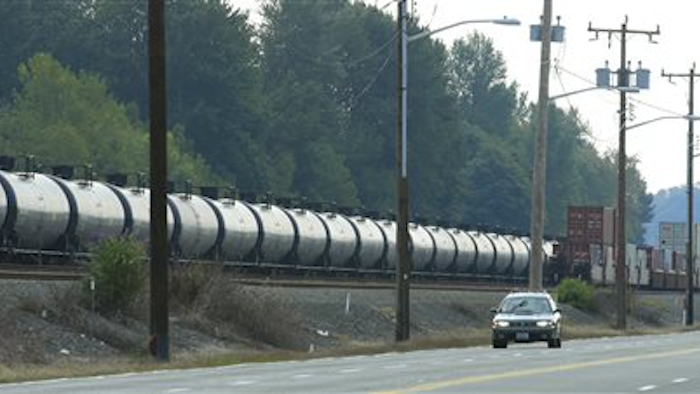 In a report to the Seattle City Council, emergency managers warned that an oil train accident resulting in fire, explosion or spill "would be a catastrophe for our community in terms of risk to life, property and environment."

BNSF Railway can make immediate safety improvements in the mile-long 100-year-old rail tunnel that runs under downtown Seattle, including installing radio communication, a fire suppression system to release water and foam, and a permanent ventilation system, according to the report written by Barb Graff, who directs the city's office of emergency management, and Seattle assistant fire chief A.D. Vickery.

About one or two milelong trains each day carry crude oil from the Bakken region of North Dakota, Montana and Canada through the city of about 650,000 residents.

Several refineries in the state are receiving shipments of crude oil, and the others are upgrading facilities to accept oil trains. Once refineries are able to accommodate additional shipments, three or more trains could pass through Seattle each day, the city report said.

Oil trains currently enter Washington state near Spokane, and travel through the Tri-Cities and along the Columbia River before traversing Seattle to refineries to the north. In the state, as many as 17 trains carry about 1 million gallons of crude oil a week through several counties, including Spokane, Benton and Clark, BNSF reported to the state in July.

"We know they can explode. We've seen the tragedy in Canada. We know they can derail. That happened two months ago in our own city," said Councilmember Mike O'Brien, whose committee scheduled a special meeting Tuesday night to discuss the report. "We have to treat this as a real threat."

Derailments of oil trains have caused explosions in North Dakota, Virginia, Alabama, Oklahoma and Quebec, where 47 people were killed when a runaway train exploded in the city of Lac-Megantic in July 2013.

Two months ago in Seattle, three tanker cars in an oil train bound for a refinery in Anacortes derailed as it pulled out of a rail yard in Seattle. BNSF officials noted at the time that nothing spilled and a hazardous material crew was on the scene in 5 minutes, but the incident raised new concerns.

BNSF spokesman Gus Melonas said the railway has made improvements to tracks and roadbed to ensure that trains travel safely the tunnel. He said the concrete-lined tunnel is inspected regularly and is "structurally safe."

"We'll review the (city) report further," Melonas said. "We take safety extremely seriously and the operation of trains is a top priority, and we'll continue to enhance our safety process."

The railway is planning to locate a safety trailer with foam equipment and extinguishers in the Seattle area, and plans to continue to train Seattle firefighters and responders.

Seattle's report notes that oil trains travel through three zones in Seattle: passing within blocks of two stadiums, through the downtown tunnel, and along the north end which has limited access because of high banks along the waterfront.

"The tunnel runs under all of downtown. What happens if something goes wrong there?" O'Brien said. "We've heard the fire department say we aren't sure we can send firefighter to fight if it's too dangerous."

Oil trains typically move about 10 mph through the tunnel, less than the maximum speed of 20 mph, and do not operate in the tunnel at the same time as a passenger train, BNSF's Melonas said.

A derailment and fire involving Bakken oil tank cars could stress fire department resources, the report said. It recommends limiting track speeds in high-density urban areas, and that the railroad company help pay for specialized training, sponsor annual drills to respond to tank car emergencies and provide a foam response vehicle to use in case of an oil train accident.

"Railroads don't carry near the rail insurance they need," he said. "If there's a meaningful risk, the railroads should have to be insured against it and they should have to find private insurance."