A large fire destroyed a manufacturing building in Seattle's Fremont neighborhood, sending a large plume of black smoke over the city and prompting an effort to contain toxic chemicals. The fire ... 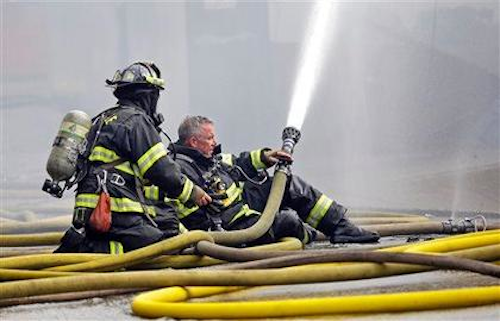 A large fire destroyed a manufacturing building in Seattle's Fremont neighborhood, sending a large plume of black smoke over the city and prompting an effort to contain toxic chemicals.

The fire at the building began shortly before 1 p.m. Tuesday. Workers inside noticed smoke coming from a machine, pulled the fire alarm and attempted to contain it with an extinguisher. The fire continued to grow, and 12 workers evacuated, Seattle Fire Department spokesman Kyle Moore said.

By the time fire crews arrived, flames had fully engulfed the building. More than 100 fire fighters fought the blaze. It took about an hour to get the fire under control, Moore said.

Both companies are considered a "large-quantity generator of hazardous waste," state Department of Ecology spokesman Larry Altose said. That means the company falls under the category of manufacturers that produce 2,200 pounds of hazardous waste a month.

Asko works with acids, base, heavy metals, cyanide, halogenated organics and flammable solvents on the site, Altose said. "We last inspected in May of 2013 and only found a few minor violations," he said.

Under city and state supervision, Asko contracted a chemical-containment team, which is pumping the water runoff from the effort to put out the fire. "Fortunately, it's not raining, so it's possible to capture that water," Altose said.

The manufacturing building is a block up from the Ship Canal, which links Lake Washington with the Puget Sound. It's also used by migrating salmon and other wildlife.

Moore cautioned that anyone who walked through the runoff created by the fire fight should wash their shoes, as the runoff has a similar makeup to household bleach.