Greenbrier's Tank Car of the Future is designed for safer transportation of crude, ethanol and other flammables in North America, as well as use with other hazardous materials traffic. 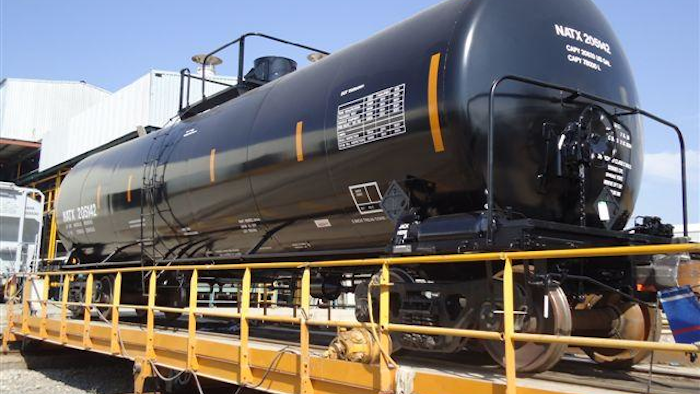 Greenbrier's comments center on enhanced standards for new tank cars and support PHMSA's proposed "Option 2" design for new tank cars in flammable service built after Oct. 1, 2015. In comments solely focused on retrofitting the existing tank car fleet, GBW endorses PHMSA's timeline for retrofitting by 2020 all existing tank cars in flammable service, currently estimated at 98,000 units, and notes its plans to invest in four streamlined facilities to help achieve these aggressive targets. The comments are in addition to those that Greenbrier previously filed in September 2014 in the counterpart regulatory process now underway by Transport Canada.

"Our chief engineer witnessed the devastating aftermath of the accident at Lac-Megantic including the profound and unforgettable loss of 47 human lives. A key objective in offering our comments is to prevent tragedies like Lac-Megantic by mitigating the consequences of train accidents through improved tank car design," William A. Furman, Chairman and CEO of Greenbrier said. "It is time for PHMSA to prescribe fundamental safety standards to guide our industry. Time is of the essence.  Secretary Foxx has recognized this in his stated commitment to finalize rules as soon as possible and we strongly encourage federal regulators to act no later than the end of 2014."

Among rail equipment providers, Greenbrier has been a leading voice in safer tank car design, meeting with key industry leaders, top railcar engineers, elected officials and the appropriate government agencies. Greenbrier was the only tank car manufacturer to appear before the National Transportation Safety Board (NTSB), during its April 2014 forum on the safe transportation of crude oil and ethanol.

"We have invested our time, our financial resources, our energy and our passion into this rulemaking because it is important to Greenbrier, our customers and, most of all, to the safety of the communities where our railcars travel. The design for a safer tank car is known, materials are available and customers are now ordering tank cars built to the safest design standard. We are proud Greenbrier is aligned with some of the best customers in the world who understand the power of serving the public with the primary goal of safety foremost in mind. It is now PHMSA's time to act by issuing a substantial and workable final rule," Furman continued.

Greenbrier supports PHMSA's effort to direct new design standards for tank cars used in flammable liquid service, specifically, "Option 2" published in the NPRM. Greenbrier was the first to announce plans to design a tank car with these specifications, which Greenbrier calls the "Tank Car of the Future", and plans to double its production capacity for new tank cars over the next 12 months to meet surging demand.

Greenbrier's Tank Car of the Future is designed for safer transportation of crude, ethanol and other flammables in North America as well as use with other hazardous materials traffic. The car has advanced safety features which include a 9/16"-thick steel tank shell, more robust top and bottom outlet protection and jacketed shells with thermal protection. These new design features combine to inhibit discharge of contents during a derailment, to reduce penetration of the tank shell and to slow "pool fires" that can result when hazardous contents of a tank car escape in a breach and are ignited. The new design will also be equal in capacity volume to the legacy DOT-111 tank car with a loading volume of 30,000 gallons.

Conditional Probability of Release (CPR) measures the likelihood of tank car spills in the event of a derailment at different speeds and by different car types. With the Tank Car of the Future design, at a derailment speed of 50 mph, CPR improves by more than 8 TIMES versus the least-protected DOT-111 legacy tank car. Also when measured by CPR, the Tank Car of the Future is twice as safe as the current state-of-the-art tank car for transporting hazardous materials-a fully jacketed and insulated CPC-1232.

"While it is impossible to eliminate all risk of accidents, it is our industry's responsibility to offer a safer tank car alternative. We are confident that the design features identified as 'Option 2' in the NPRM will lead to safer transport of flammable liquids at any speed," said Greg Saxton, ?Senior Vice President & Chief Engineer at Greenbrier.

GBW supports PHMSA's effort to retrofit the existing fleet of tank cars currently used in the transport of all flammable commodities. Furthermore, GBW agrees with PHMSA that every packing group classification-PG I, II and II-within the Class 3 flammables category must be transported in a retrofitted tank car by 2020, an aggressive but achievable timeline. GBW will deliver on retrofit designs for the legacy DOT-111 tank cars that include optimally-sized pressure relief valves, head shields, top fittings protection, thermal protection and shell jackets with thicker metal for tank car exteriors. Appropriate retrofit choices permit extended service for DOT-111 tank cars in flammable liquids service and for other hazardous materials transport as these cars are placed in lower risk service over time. GBW also offers retrofit alternatives for the most recently built CPC-1232 tank cars, with features including enhancements to the bottom outlet valve and pressure relief valves that will reduce the likelihood of tank cars releasing contents in derailments.  Combined, these retrofits meaningfully improve the safety performance of all tank car types in continued service.

"We believe the retrofit timelines outlined in the NPRM can be met," said Jim Cowan, CEO of GBW. "To address this need GBW is making multi-million dollar investments in our repair and retrofit shop capacity to perform large legacy retrofits in a streamlined production environment at four of our locations including three in Texas and one in Georgia. GBW will do its part to ensure our industry can deliver on the retrofits that PHMSA will require."

Greenbrier, (www.gbrx.com), headquartered in Lake Oswego, Oregon, is a leading supplier of transportation equipment and services to the railroad industry. It builds new railroad freight cars in four manufacturing facilities in the U.S. and Mexico and marine barges at its U.S. manufacturing facility. Greenbrier also sells reconditioned wheel sets and provides wheel services at nine locations throughout the U.S.

GBW is a joint venture between The Greenbrier Companies, Inc. and Watco Companies, LLC ("Watco") formed in June 2014. Greenbrier is one of the leading designers, manufacturers and marketers of railroad freight car equipment in North America and Europe. Watco is one of North America's largest short line railroad operators, and provides terminal and port services to a variety of industries, including crude oil and ethanol transloading, and fleet management services.