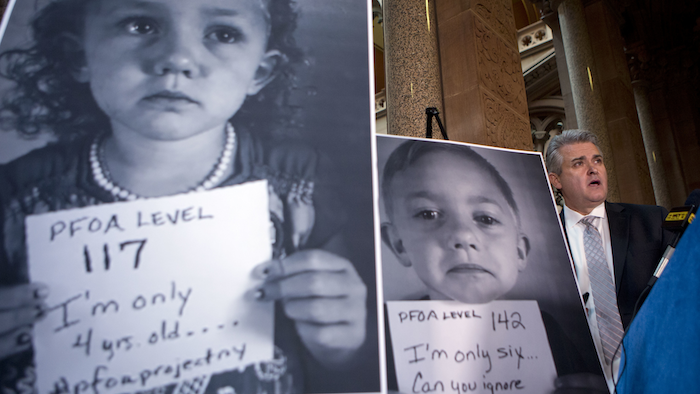 The Department of Environmental Conservation sent formal surveys last week to more than 150 facilities that may have manufactured or used PFOA, or perfluorooctanoic acid, Peter Walke, the agency's chief of staff, told The Associated Press in a recent interview.

Surveys also were sent to fire departments, airports and major storage facilities that may have used the relatedchemical PFOS, a component of firefighting foam.

"If any facility is found to have discharged contamination into the community, the state will pursue those responsible to the fullest extent of the law," Walke said.

Responses are due to the department by July 15. The agency will analyze the survey data to determine the need for future site investigations.

The action follows an investigation and cleanup launched in January in the rural factory village of Hoosick Falls, where high levels of PFOA were initially found in drinking water in testing done in 2014 by a resident concerned about a perceived high cancer rate.

A group of Hoosick Falls residents and several state and federal elected officials are calling for a public hearing on why the state Department of Health didn't tell residents not to drink their tap water until 18 months after the agency knew of the contamination, and then acted only under pressure from an Environmental Protection Agency official.

"For 18 months, we were not told that there was poison in the water our children were drinking," said Mary Ann Jacobs, whose two children, ages 9 and 10, were found to have blood levels of PFOA about 20 times the national average.

Because PFOA is unregulated, drinking water supplies aren't routinely tested for its presence. The EPA last month issued a standard for long-term exposure to PFOA, following years of public pressure by advocacy groups.

A top aide to Democratic Gov. Andrew Cuomo met with Jacobs and other residents at the Capitol last week and outlined the state's actions, including a health study that includes blood testing and an analysis of cancer occurrence. He said it's up to the Legislature whether to hold hearings.

After the Hoosick Falls contamination was publicized in January, testing near similar factory sites in the region uncovered more residential well contamination in Bennington and Pownal, Vermont, and Merrimack, New Hampshire.

Vermont launched a statewide survey in April and has reported no additional water contamination. New Hampshire's Department of Environmental Services in May released a list of 44 companies it had identified as potential users of PFOA. Contamination has been found in seven drinking water wells near one of them in Amherst, the New Hampshire department spokesman Jim Martin said.

New York's statewide survey for potential PFOA contamination sites was launched by Cuomo's Water Quality Rapid Response Team, which was formed in February to address crises like that in Hoosick Falls.

Liz Moran, a water quality specialist at Environmental Advocates of New York, said DEC's survey is a good first step but it relies on reporting by potential polluters who don't have the public's trust.

"We think there should be testing for PFOA and PFOS statewide in every water supply," Moran said.

New York federal lawmakers also have weighed in. Sen. Charles Schumer, a Democrat, said Monday a hearing would be helpful. "We have an obligation to these people," he said.

Republican Rep. Chris Gibson called on the House Committee on Oversight and Government Reform to investigate the response by state and federal officials to the contamination in Hoosick Falls after the state Assembly dropped plans for such a hearing in April.

Sen. Kirsten Gillibrand, a Democrat, has asked the Senate Environment and Public Works Committee to examine the health effects of PFOA and what action can be taken to eliminate the public health risk when it is detected.