Stuttgart-based Daimler AG is investigating what it says are "possible indications of irregularities" in its emissions certification process. 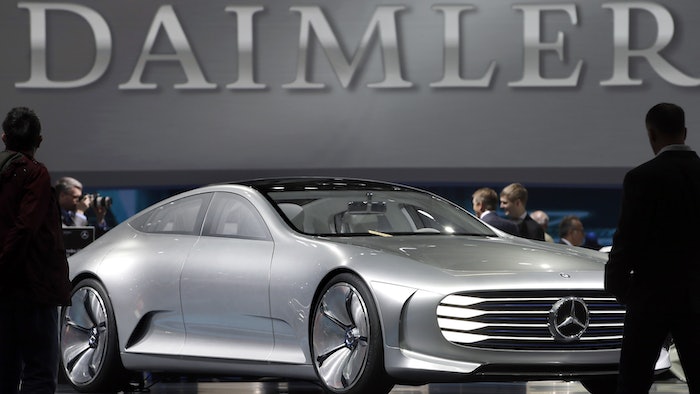 Daimler shares were off 6.5 percent at 62.36 euros in morning trading in Europe.

Officials on a conference call with journalists were asked several questions about the matter but said they could provide no information beyond Thursday's announcement, as the issue overshadowed the company's announcement of first-quarter earnings.

"Our conservative communication supports a constructive relationship with the authorities," said chief financial officer Bodo Uebber. "I cannot give you further information."

Stuttgart-based Daimler AG is investigating at the request of the U.S. government what it says are "possible indications of irregularities" in its emissions certification process.

The issue has made investors uneasy because fellow German automaker Volkswagen has admitted that its diesels were designed to defeat U.S. emissions tests.

U.S. owners of Daimler's Mercedes-Benz BlueTEC diesels recently filed a class-action lawsuit claiming the cars are programmed in a way that lets them emit illegal levels of emissions, similar to diesels made by Volkswagen. Daimler says the lawsuit's claims are without merit and that the Justice Department investigation is unrelated.

But company officials said the dip in earnings did not indicate a lasting slowdown in their business. The company said in a statement that net profit had been hurt by expenses associated with introducing the new E-Class, a luxury sedan stuffed with new driver-assistance technology the company hopes will make it a highly profitable contributor to earnings.

Profits were also held back by increased investments in new products and technology, which in theory should pay off in higher profits down the road.

Uebber said the company expected a stronger second half of the year as E-Class sales kick in.

CEO Dieter Zetsche said in a statement Friday that the sales growth shows "we are following the right strategy and have the right products in the market."