A defiant Takata Corp. told a U.S. safety agency that its demand for a nationwide air bag recall isn't supported by evidence, and the government doesn't have authority to tell a parts maker to do a recall. The company laid out its position in a Tuesday letter to the National Highway... 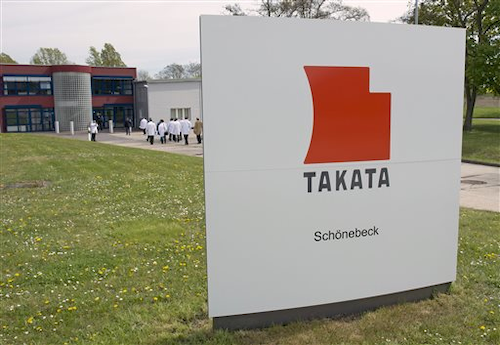 A defiant Takata Corp. told a U.S. safety agency that its demand for a nationwide air bag recall isn't supported by evidence, and the government doesn't have authority to tell a parts maker to do a recall.

The company laid out its position in a Tuesday letter to the National Highway Traffic Safety Administration obtained by The Associated Press that rejected the agency's demand for a recall.

It sets the stage for a confrontation at a House subcommittee hearing on the matter Wednesday morning.

In a statement, NHTSA called Takata's response "disappointing" and said it will review the response to determine the agency's next steps. A week ago, the agency threatened civil fines and legal action if Takata didn't declare the driver's air bag inflators defective and agree to the recall. It can impose fines of up to $35 million.

The inflators can explode with too much force, spewing shrapnel into the passenger compartment. At least five deaths and dozens of injuries have been linked to the problem worldwide.

But in its letter, Takata told Frank Borris, director of NHTSA's Office of Defects Investigation, that the agency is basing its demand for a national recall on slim evidence.

A national recall would add 8 million vehicles to previous recalls, Takata said. Those have been limited to high-humidity areas in Florida, Hawaii, along the Gulf Coast and in some U.S. territories. Takata has maintained that prolonged exposure to airborne moisture can cause the inflator propellant to burn faster than designed, causing it to explode with too much force.

But NHTSA, in its letter demanding a national recall, pointed to inflator ruptures that injured drivers in California and North Carolina — both outside the recall zone.

Takata, however, told the agency that the California case involving a 2005 Honda Accord already is covered by a Honda service campaign, making a recall unnecessary. A 2007 Ford Mustang in the North Carolina case has not been examined by either Takata or NHTSA, the letter said. "Therefore, there is no way to ascertain what actually occurred during the incident, whether any inflator ruptured," it said.

Takata also contends that NHTSA only has authority to seek recalls from auto manufacturers and makers of replacement parts, not original parts suppliers. NHTSA disagrees.

"It is Takata's current view that the currently available, reliable information does not support a nationwide determination of a safety defect in all vehicles equipped with the subject driver-side inflators,'" the company's head of product safety wrote in the letter.

A Takata quality executive and David Friedman, deputy NHTSA administrator, are scheduled to appear at Wednesday's hearing before a House Energy and Commerce subcommittee.

Takata also said that it has tested 1,057 driver and passenger inflators taken from locations outside the high-humidity zone, and none of them has ruptured. The company said it will expand production of replacement inflators for the current recalls and will expand the recalls if warranted.

"If those testing efforts or data from other sources indicate the existence of a safety defect beyond the scope of the current campaigns, Takata will promptly take appropriate action," the company said.

NHTSA said in a statement Tuesday night Takata shares responsibility for keeping driver's safe. "We believe anything short of a national recall does not live up to that responsibility," the statement said.