There will only be a few hundred, and they won't be cheap, but Toyota is about to take its first small step into the unproven market for emissions-free, hydrogen-powered vehicles. The world's largest automaker announced Tuesday that it will begin selling fuel cell cars in... 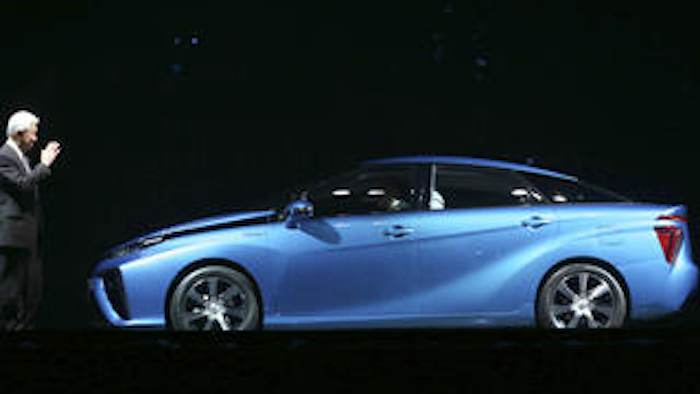 There will only be a few hundred, and they won't be cheap, but Toyota is about to take its first small step into the unproven market for emissions-free, hydrogen-powered vehicles.

The world's largest automaker announced Tuesday that it will begin selling fuel cell cars in Japan on Dec. 15 and in the U.S. and Europe in mid-2015. The sporty-looking, four-door Toyota Mirai will retail for 6.7 million yen ($57,600) before taxes. Toyota Motor Corp hopes to sell 400 in Japan and 300 in the rest of the world in the first year.

"In time, the fuel cell vehicle will become mainstream. We wanted to take the first step," said Mitsuhisa Kato, a Toyota executive vice president, at the vehicle's launch Tuesday. "We want to be at the leading edge."

Fuel cell vehicles run on compressed hydrogen gas, which in the Mirai's case is stored in two tanks mounted underneath the vehicle. They emit no exhaust, though fossil fuels are used in the production of hydrogen and to pressurize it. Both Honda and Hyundai are also experimenting with limited sales and leases of fuel cell cars. Honda showed a fuel cell concept car on Monday.

Besides the relatively high cost, buyers will have to contend with finding fuel. Only a few dozen hydrogen filling stations have been built worldwide, though governments are subsidizing the construction of more.

It's an uncertain future that depends both on whether makers can bring down the price, and a wide-enough network of filling stations is built. Yoshikazu Tanaka, deputy chief engineer for Toyota's next generation vehicle development, said he expects it will take 10-20 years for the Mirai to reach sales in the tens of thousands of vehicles a year.

Asked if it's a risk, he said yes, but Toyota views it as a challenge. Likening it to a chicken and egg situation, he said if you say it's too risky and don't move forward with production, the number of filling stations will never grow. Toyota faced a similar scenario with its gasoline-electric hybrid, the Prius, which now sells in big numbers.

"It was a big challenge when we first introduced the Prius, or hybrid car, in 1997," he said in an interview in Tokyo. "And it's an even bigger challenge this time because there is no infrastructure, and we're trying to lead" the commercialization of fuel cell cars.

Hoping to offset the inconvenience of finding fuel, Toyota gave the car a futuristic look inside and out — Mirai means future in Japanese — and made it peppy to try to attract buyers. It accelerates particularly quickly from about 40 to 70 kilometers (25 to 45 miles) per hour, Tanaka said.

Sales will be limited to the primarily urban areas that have fueling stations.

In Japan, with about 30 stations, that means the regions around Tokyo, Osaka and Nagoya cities in central and western Japan and the northern part of Kyushu island in the south. A few stations have opened in California in the United States, and there are plans to build some in the Northeast. Germany and the United Kingdom are among European countries that have or plan to build them.

The company has about 200 pre-orders for the vehicle, mainly government agencies and companies that want to go green, the company said. Over time, Kato said, Toyota hopes to help build a "hydrogen society."

Hydrogen may be more expensive than gas initially, because there are so few customers but, over time, Toyota expects it will be cheaper to run a car on hydrogen than with gas.

"To rely less on oil is very important," said Kato. "Japan has to spend its money to import fuel, so we should use it as carefully as possible."