The head of the German union representing automotive workers is speaking out against Volkswagen working with anti-labor groups at its plant in Tennessee. IG Metall President Detlef Wetzel said in a statement Friday from Frankfurt, Germany, that called on Volkswagen to... 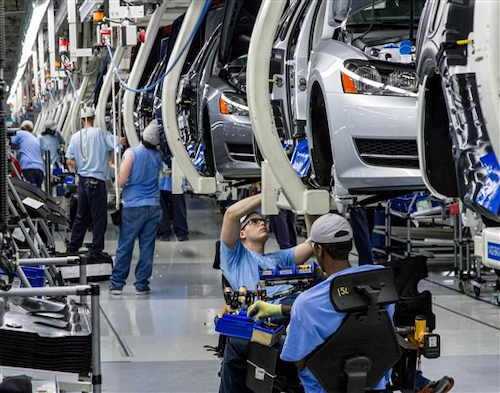 The head of the German union representing automotive workers is speaking out against Volkswagen working with anti-labor groups at its plant in Tennessee.

IG Metall President Detlef Wetzel said in a statement Friday from Frankfurt, Germany, that called on Volkswagen to "show its true colors" in officially recognizing the United Auto Workers union as its bargaining partner at the Chattanooga factory once the union proves it has signed up a majority of workers there.

"It is our objective to guarantee also under the politically difficult circumstances in the United States that labor union rights are respected and codetermination in the plant is possible," Wetzel said.

Under German law, worker representatives hold half the seats on the board of Wolfsburg, Germany-based Volkswagen, which lends added weight to Wetzel's position. It also appears to reflect some concern that a new company policy released this week could serve to undermine efforts by its U.S. ally, the United Auto Workers, to organize its first foreign automaker in the South.

Volkswagen management has been under heavy pressure from union representatives on the board because the U.S. plant stands alone among the automaker's worldwide facilities without formal labor representation for workers. The company has voiced support for creating a German-style works council to represent both salaried and hourly workers, but says U.S. law requires it to work with an independent union to create one.

Volkswagen this week established guidelines for giving labor groups that sign up at least 15 percent of workers access to plant facilities and to regular meetings with management. While the policy would apply to the United Auto Workers, it could also benefit the American Council of Employees, an organization led by workers who spearheaded efforts to defeat the UAW in a union vote in February.

"IG Metall will not accept if Volkswagen treats the UAW just as one as those groups who have acted in the past resolutely against the union," he said. "There must not be any cooperation between Volkswagen and anti-union groups or yellow unions."

So-called yellow unions are organizations more focused on representing company interests than those of the workers. Sean Moss, the president of the American Council Employees in Chattanooga, has argued that the group opposes the UAW, but not unions as a whole. The group's goal is to "present employees with a clear choice and an alternative to the Detroit-led failed alternative," Moss said earlier this week.

The UAW decried the influence of Republican politicians and Washington-based anti-union groups in churning up the opposition in advance of the February election. The UAW ended up losing that vote 712-626, and soon filed a challenge with the National Labor Relations Board.

The UAW said earlier this week that it had signed a written agreement with VW management to abandon that complaint and to work toward landing the production of a new SUV at the plant in exchange for eventual recognition by the company as bargaining partner at the plant.

This week's labor policy was seen as a key step toward gaining that status, but a lack of detail in the guidelines has left many questions unanswered.

"On paper that's not much of a commitment, you could satisfy that by sitting down, listening to what organizations have to say and then leaving," he said. "That's very different than what the law gives unions, which is a right to bargain."