Finally, there is an all-electric car for people who thought they would never want one. The 2015 Kia Soul EV is a normal-looking Soul with a useful travel range of nearly 100 miles on a single charge, stable ride and handling, generous and flexible cargo space, comfortable seating and fast-charge... 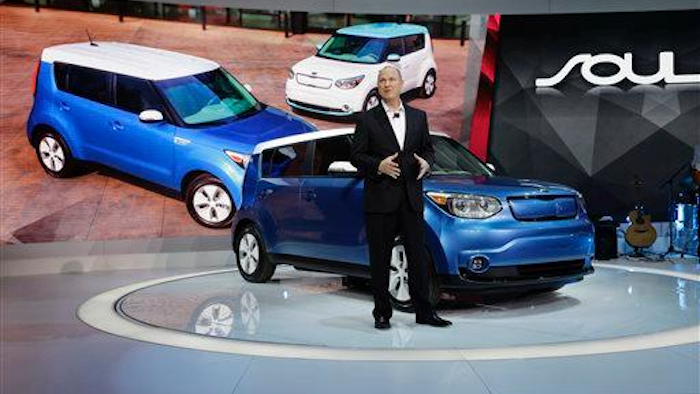 Finally, there is an all-electric car for people who thought they would never want one.

The 2015 Kia Soul EV is a normal-looking Soul with a useful travel range of nearly 100 miles on a single charge, stable ride and handling, generous and flexible cargo space, comfortable seating and fast-charge capability.

Indeed, the built-in, direct-current, fast-charge port in the Soul EV allows for 80 percent of the onboard battery to be recharged from empty in as little as 33 minutes.

Most importantly, the Kia Soul EV, which is rated by the federal government at 105 miles per gallon-equivalent in combined city/highway travel, has a starting manufacturer's suggested retail price, including destination charge, of $34,500.

Plus, the Soul EV qualifies for a $7,500 federal government tax credit, so a buyer may reduce his or her income taxes by up to $7,500 for the year that the car is purchased.

This newest electric vehicle — and the first from South Korea's Kia — is sold now in California and will spread to more U.S. states in 2015.

It's in the price range of competitors.

Tesla's sporty-looking Model S sedan with 208-mile range as a base, 2014 model, has a starting retail price, including destination fee, of $71,070.

Meantime, the top-selling electric car in the United States — the Nissan Leaf — has an 84-mile travel range on a full charge and carries an MSRP, including destination charge, of $29,860.

Onlookers typically assumed the Soul EV was a regular, gasoline-powered Soul during the test drive. This Soul stood out because its roof was painted white while the body was bright blue; less noticeable was the fact that it had no exhaust pipe.

Competing all-electric vehicles are typically smaller in size and interior roominess than the Soul EV. For example, the 2015 Chevrolet Spark EV, which has a starting retail price, including destination charge, of $27,645 and a travel range of 82 miles, is 16.5 inches shorter than the Soul.

This is the same cargo space that's in a gasoline-powered Soul, and it expands to a sport utility vehicle-like 49.5 cubic feet when rear seatbacks are folded down.

In fact, during the test drive, the tall Soul EV Plus model sometimes felt more like an SUV than a car, because driver and passengers sat up a ways from the pavement on comfortable seats and had lots of headroom.

The rear liftgate opening was wide to aid loading, and cargo space was normal sized.

Some electric cars have restricted cargo space because of the intruding onboard battery pack. But Kia engineers use a highly dense, lithium-ion polymer battery pack that is shaped and spread out to fit under the Soul's floor. This also makes for a better center of gravity in the Soul EV, which aids handling.

To be sure, the Soul EV rides with more heft than its four-cylinder-engine sibling. At 3,289 pounds, it's some 450 pounds heavier than the gasoline Soul. Still, the electric motor and battery pack provide good get up and go with 210 foot-pounds of torque available instantly. The test car effortlessly zipped ahead of other vehicles from stoplights.

Brightly colored gauges encourage fuel-efficient driving, but an "eco" mode can be turned off for a less-resistant feel to the accelerator pedal.

Travel was mostly quiet. A high-pitch, electrical "whir" sound sometimes could be heard, particularly with the windows down, and the low-friction tires conveyed some road noise.

Additionally, Kia engineers installed a subtle, bell-like chime that activates when the Soul is in reverse to alert nearby pedestrians.

The rear camera is a lifesaver, since window pillars at the sides of the rear liftgate window are thick and obscure the view of approaching traffic as the Soul backs up.

The test car was fully charged by a regular, 120-volt outlet in a home garage overnight, and a 240-volt charger at a public parking garage cut the time to less than four hours.

The Soul EV's UVO telematics system lists the locations of 240-volt chargers as well as the fast chargers.

After most full charges, the tester showed a travel range of 100 miles, not the 93 miles that the federal government certifies.

According to the U.S. Department of Transportation Federal Highway Administration, 100 miles is sufficient for 90 percent of all household vehicle trips in this country.

Driving the Soul EV with care and coasting extended the range.

Buyers just have to like the Soul's boxy exterior styling. Thoughtful features include big, bright blue lights atop the dashboard that tell if the car is charging or fully charged. They can be seen from all sides of the car.