"The demand for crossover SUVs is off the charts," said Bill Fay, a Toyota group vice president. 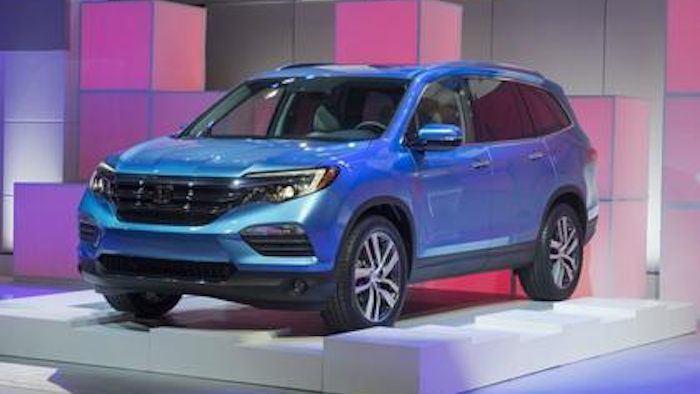 Several of the companies reported their best April totals in years. Overall, sales were mostly in line with analysts' predictions of a 6 percent increase compared with a year ago. All automakers were scheduled to report sales on Friday.

Buyers, buoyed by lower gasoline prices, flocked to crossover SUVS that handle like cars and sit up higher. The gains came at the expense of many small and midsize cars.

"The demand for crossover SUVs is off the charts," said Bill Fay, a Toyota group vice president.

The revamped Ford Edge midsize SUV posted its best April sales ever at just over 13,000, up 78 percent from a year ago. Ford sold 26,000 Escape small SUVs, up nearly 5 percent. But sales of the Fusion midsize car and Focus compact car both fell.

Sales of the F-Series pickup, Ford's top-selling vehicle, fell 1 percent to 63,000. The company continues to ramp up production of a new model with an aluminum body. Selling prices for the F-Series averaged a record $42,600, with lower monthly payments due to longer loans driving purchases of loaded-out trucks.

GM sold 46,000 Chevrolet Silverado pickups, its best-seller, for a gain of nearly an 8 percent. Sales of the Ram pickup, Fiat Chrysler U.S. LLC's top-selling vehicle, rose 3 percent to just under 38,000.

Fiat Chrysler's Jeep brand benefited from the SUV craze as well. Jeep posted its best-ever monthly sales at nearly 72,000, up 20 percent from a year ago. Overall, Fiat Chrysler's U.S. sales rose about 6 percent.

At Nissan, sales were up 5.7 percent to nearly 110,000. The company said its small and midsize SUVs set an April record, led by the Nissan Rogue with an increase of 45 percent.

Hyundai Motor Co. also reported its best April ever with sales up 2.9 percent to slightly above 68,000.

The Volkswagen brand, which lacks strong SUVs, saw sales fall about 3 percent to just over 30,000.