Capsules would catapult through a large, nearly air-free tube at more than 700 mph. Inside, they would be pulled down the line by magnetic attraction. Each capsule would float on a thin cushion of air it creates — like an air hockey table in which the puck produces the air instead of the surface. 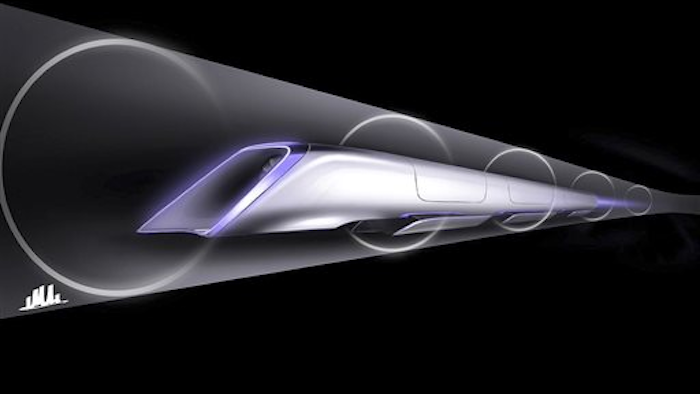 LOS ANGELES (AP) -- The concept sounds like something from the comic books that billionaire entrepreneur Elon Musk read religiously as a boy: a capsule that speeds

along as fast as sound, carrying people between major cities, never troubled by bad weather or turbulence.

If Musk has his way, this will be a reality within a decade.

Coming from almost anyone else, the hyperbole would be hard to take seriously. But Musk has a track record of success. He co-founded online payment service PayPal, electric luxury carmaker Tesla Motors Inc. and the rocket-building company SpaceX.

On Monday, he unveiled a transportation concept that he said could whisk passengers the nearly 400 miles between Los Angeles and San Francisco in 30 minutes — half the time it takes an airplane.

If it's ever built.

His "Hyperloop" system for travel between major cities is akin to the pneumatic tubes that transport capsules stuffed with paperwork in older buildings.

In this case, the cargo would be people, reclining for a ride that would start with a force of acceleration like an airplane but smooth out from there.

Capsules would catapult through a large, nearly air-free tube at more than 700 mph. Inside, they would be pulled down the line by magnetic attraction.

Each capsule would float on a thin cushion of air it creates — like an air hockey table in which the puck produces the air instead of the surface. To minimize friction, a powerful fan at the front would suck what air is in the tube to the rear.

"Short of figuring out real teleportation, which would of course be awesome (someone please do this), the only option for super fast travel is to build a tube over or under the ground that contains a special environment," Musk wrote in his proposal, which was posted online at http://www.spacex.com/hyperloop .

Capsules could depart every 30 seconds, carrying 28 people, with a cost of $20 each way, according to Musk's plan. The proposed route would follow Interstate 5 — a well-traveled path linking California's north and south through the agriculture-rich Central Valley.

On a conference call Monday, Musk said that if all goes right, it would take seven to 10 years before the first passengers make the journey between California's two biggest metro areas. He put the price tag at around $6 billion — pointedly mentioning that's about one-tenth the projected cost of a high-speed rail system that California has been planning to build.

Indeed, the Hyperloop was inspired by that rail system, which has a cost too high and speed too low to justify the project, Musk said.

"If and when Mr. Musk pursues his Hyperloop technology, we'll be happy to share our experience about what it really takes to build a project in California, across seismic zones, minimizing impacts on farms, businesses and communities, and protecting sensitive environmental areas and species," Richard said.

Like the bullet train, the Hyperloop didn't take long to attract skepticism.

Musk had framed his concept as a fifth way — an alternative to cars, planes, trains and boats. Citing barriers such as cost and the mountains that rim the Central Valley, one transportation expert called Musk's idea novel, but not a breakthrough.

"I don't think it will provide the alternative that he's looking for," said James E. Moore II, director of the transportation engineering program at the University of Southern California.

Monday's unveiling lived up to the hype part of its name.

Musk has been dropping hints about his system for more than a year during public events, mentioning that it could never crash and would be immune to weather.

By the afternoon, the word Hyperloop — which had been mentioned a handful of times in recent weeks on Twitter — was being tweeted about 20 times every minute. Hyperloop was the top "hot search" on Google, with more than 200,000 searches.

Musk has said he is too focused on other projects to consider actually building the Hyperloop, and instead is publishing an open-source design that anyone can use or modify.

That's still the case, he said Monday, but added that if no one else steps forward, he might build a working prototype. That would take three or four years, he said.

As with Tesla and SpaceX, Musk mused, there are bound to be unforeseen technical obstacles down the track.