Another ship struck the bottom while trying to avoid the stuck freighter. 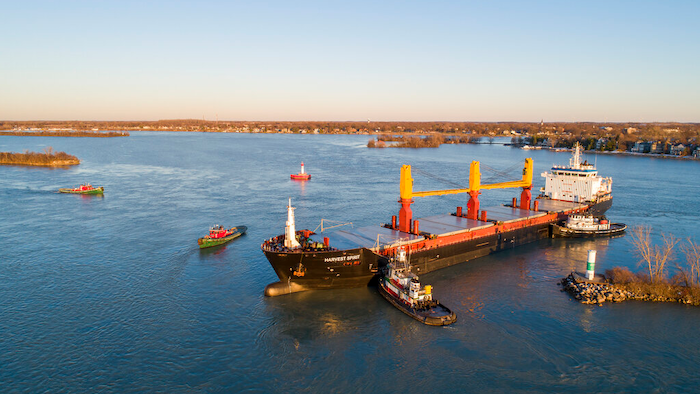 Tugboats work to free the freighter Harvest Spirit that turned sideways and grounded in the Livingstone Channel of the Detroit River.
Associated Press

DETROIT (AP) — A freighter has become stuck in a Detroit River channel, slowing some shipping between the Great Lakes.

The Harvest Spirit ran aground Wednesday on the Canadian side of the river, about 19 miles (30 kilometers) south of Detroit. It was sideways and blocking the Livingstone Channel.

Tugboats were called in late Wednesday. Another ship struck the bottom while trying to avoid the freighter. That contributed to a logjam of cargo-hauling vessels along the waterway.

“We have vessels stacked up in Lake Huron about Port Huron and in the Detroit River down by Detroit,” said Eric Peace, director of operations and communications for the Westlake, Ohio-based Lake Carriers Association, which represents vessels operating under the U.S. flag on the Great Lakes.

The Harvest Spirit operates under the Canadian flag. It is carrying about 74,000 gallons (280,120 liters) of diesel fuel and more than 9,000 metric tons of furnace coke.

Officials have received no reports Thursday of pollution from the freighter, according to Lauren Solski, a Canadian Coast Guard spokeswoman. The freighter’s owner is working on a salvage plan, she said.

On Wednesday, the Canadian Coast Guard started directing other vessels, if their operators deemed it safe, to use the shallower Amherstburg Channel. Peace said larger ships — including those hauling iron ore — must use the Livingstone Channel.

“We’re toward the end of our season and trying to get as much as we can shipped,” he said.