Any U.S. company seeking to import goods from the company would have to prove they were not made with the forced labor. 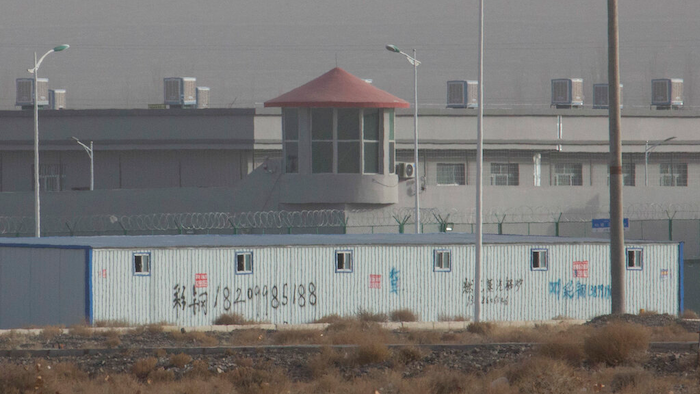 A guard tower and barbed wire fences are seen around a facility in the Kunshan Industrial Park in Artux in western China's Xinjiang region.
Associated Press

WASHINGTON (AP) — The U.S. said Wednesday it would block imports from a major Chinese producer of cotton goods because of its reliance on workers detained as part of a crackdown on ethnic minorities in China's northwest.

Customs and Border Protection issued an order halting shipments from the state-controlled Xinjiang Production and Construction Corps. Any U.S. company seeking to import goods from the company would have to prove they were not made with the forced labor of Uighurs and other ethnic minorities subjected to the crackdown.

China swiftly denounced the measure, with foreign ministry spokesperson Hua Chunying calling it a deliberate effort to use “false news" to “restrict and suppress relevant Chinese parties and enterprises and curb China’s development."

In July, the U.S. Treasury added XPCC to a sanctions list that prohibits Americans from conducting any financial transactions with the company. It is the sixth enterprise from the Uighur region whose goods have been blocked by Customs in recent months.

Still, the new order represents an escalation of U.S. efforts to pressure China over its campaign in Xinjiang, where authorities have imprisoned more than 1 million people in brutal conditions as part an effort to force ethnically and culturally distinct minorities to assimilate into the dominate Han Chinese culture.

XPCC controls about a third of cotton production in the Uighur region and about 6% of all cotton globally, according to the Worker Rights Consortium, a nongovernmental organization.

“CBP’s action is a body-blow to every brand that intends to continue sourcing cotton from the Uighur Region,” Scott Nova, the group's executive director, said in a statement.

U.S. officials, in announcing the trade measure, did not name any companies that have imported goods produced by XPCC.

The Trump administration action comes as Congress considers legislation that would declare all goods produced in Xinjiang as presumptively the product of forced labor and therefore barred from being imported into the United States.

The legislation passed the House of Representatives with overwhelming bipartisan support in September but still must clear the Senate.

Some companies and business groups oppose a region-wide ban, arguing it would harm legitimate producers and manufacturers because there is no effective way to inspect and audit suppliers. The region is a source of tomatoes and electronic goods as well as cotton and textiles.

China has disputed the widespread and consistent reports of abuse and mistreatment of the Uighurs and other minorities, defending the campaign as an effort to crack down on extremism and claiming the vast network of detention camps are for vocational and language training.

Chinese spokesperson Hua defended Chinese labor practices and treatment of Uighurs, while accusing the U.S. of violating market principles and damaging the interests of both countries' companies and consumers.

“The Xinjiang government at all levels fully respects the employment wishes of ethnic minorities and provides necessary training to workers who voluntarily applied for the (training) sessions to improve their vocational skills," Hua said.

Union Pacific maintains that it is taking appropriate precautions, but unions disagree.
Dec 23rd, 2020
Follow Us
Most Recent