Trade, Technology and Security At Risk in US-China Feud

From high-tech chips to control of the high seas, their interests are closely intertwined. 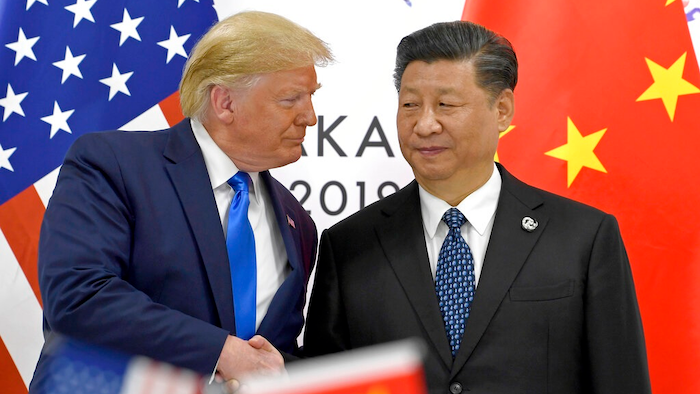 In this June 29, 2019, file photo, U.S. President Donald Trump, left, shakes hands with Chinese President Xi Jinping during a meeting on the sidelines of the G-20 summit in Osaka, western Japan. The ongoing sharp deterioration in U.S.-China ties poses risks to both countries and the rest of the world. With the U.S. presidential campaign heating up, all bets are that relations with China will only get worse. At stake are global trade, technology and security.
AP Photo/Susan Walsh, File

BEIJING (AP) — They have the largest economies in the world. They spend more than anyone else on their militaries. From high-tech chips to control of the high seas, their interests are closely intertwined.

The ongoing sharp deterioration in U.S.-China ties poses risks to both countries and the rest of the world. In the latest escalation, a U.S. consulate in Chengdu in southwestern China shuttered Monday, ordered by China to close in retaliation for the U.S. shutting down its consulate in Houston last week.

With the U.S. presidential campaign heating up, all bets are that relations with China will only get worse. A look at what's at stake:

Both countries already have suffered heavy losses in a tariff war that erupted in 2018 over Beijing’s technology ambitions and trade surplus. If talks on ending the dispute fail, the world could face downward pressure on trade at a time when the global economy is already reeling from the coronavirus pandemic.

The United States is China's biggest single-country export market, even after President Donald Trump imposed punitive tariffs on Chinese goods. And China is the No. 3 market for American exporters, as well as a huge market for goods and services produced in China by U.S. companies ranging from General Motors Co. to Burger King.

Chinese purchases of American farm goods, semiconductors and other goods declined 11.4% last year but still exceeded $100 billion. Exports to China support just under 1 million American jobs, according to the U.S.-China Business Council, though that was down 10% from 2017’s peak.

China is the biggest export market for Iowa and other American farm states, which were slammed when Beijing suspended imports of soybeans and raised tariffs on pork and other goods.

That briefly boosted sales for soybean exporters in Brazil and Argentina, though China resumed buying lower-priced American beans under the “Phase 1” trade truce signed in January.

But if the two can't resolve broader differences on trade, it will be a blow not only to their exporters but also to other Asian economies that supply China’s factories with raw materials and components.

U.S. and Chinese producers of telecom, computer, medical and other technology and their markets are tightly interwoven. Apple, Dell, Hewlett-Packard and others rely on Chinese factories to assemble most of their smartphones, computers and other consumer electronics. Those factories need processor chips and other components from the United States, Japan, Taiwan and Europe.

The disruption caused by moves including the Trump administration’s curbs on Chinese tech giant Huawei’s access to U.S. components and technology threatens to disrupt those flows and cost suppliers, including Silicon Valley companies, billions of dollars in lost revenue.

China is also a top market for Apple and other U.S. tech brands, and is increasingly becoming a technology competitor with its own brands in smartphones, medical equipment and other fields.

The United States often is the top market for China's highest-value-added goods. Beijing has been urging exporters to find other markets, but many say Asian and even European markets won’t buy such high-value goods.

While the U.S. has long been the predominant military power in the Pacific, China now has two operational aircraft carriers and an arsenal of missiles seen as a threat to U.S. vessels and bases in the region.

Military tensions have largely focused on the South China Sea, a crucial waterway that is the subject of overlapping territorial claims by China and several smaller Asian nations.

In 2018, a Chinese destroyer came perilously close to colliding with a U.S. destroyer, the USS Decatur, while executing what the Navy called an “unsafe and unprofessional maneuver” in the South China Sea.

A Chinese fighter jet collided with a U.S. Navy surveillance plane in international airspace over the South China Sea in 2001, leading to major diplomatic incident after the U.S. plane made an emergency landing on a Chinese island.

Taiwan is another potential flashpoint. China claims the self-governing island as its territory, to be taken by force if necessary. The U.S. is bound by its own law to ensure the island has a credible defense and has approved military sales to Taiwan under Trump.

Taiwan’s foreign minister said last week that Chinese military flights near the island have been taking place on a near-daily basis, more frequently than previously reported.

Washington upped the ante earlier this month by declaring that it did not recognize most of China’s maritime claims in the South China Sea, a break with its previous policy of not taking a stance on the sovereignty disputes.

An improving economy drove purchases of imported foreign goods.
May 4th, 2021
Follow Us
Most Recent