Trump Says China Deal Could Wait until after Election

Trump said Tuesday that the only limiting factor to reaching an agreement with China is whether he wants to make a deal. 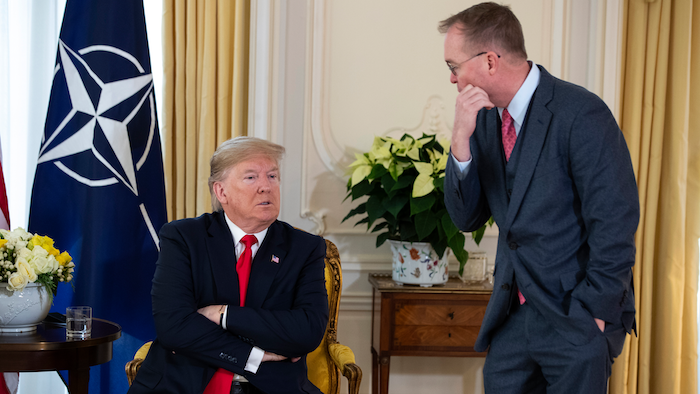 LONDON (AP) — President Donald Trump on Tuesday downplayed the likelihood of reaching a U.S.-China trade deal before next year’s elections — and then shrugged off the tailspin that his remarks caused in the stock market.

Speaking in London, where he is attending a NATO summit, Trump said he had “no deadline’’ to end the 16-month trade war between the world’s two largest economies, which has caused economic damage for both sides.

“In some ways I like the idea of waiting until after the election," Trump added.

The president has previously suggested that China wanted to wait until after the election to negotiate a deal.

Stocks began sinking right after Trump’s latest rhetoric shot at the Chinese leadership. His brash remarks could amount to either a short-term negotiating gambit or a sign of his willingness to run for re-election without a breakthrough in the trade war. At midday, the Dow Jones Industrial Average was down nearly 400 points.

Later Trump dismissed the tumult on Wall Street, choosing instead to highlight how much stock prices have risen since the start of the year.

“We have picked up record numbers in our stock markets, so that’s OK. That’s the way I feel.” Trump replied to questions from reporters. “I have to make the right deal. I’m not going to make a deal that’s not going to be great for our country. It can’t be an even deal. If it’s an even deal, it’s no good.”

The trade negotiations with China, the president declared, are at a “critical stage.”

On Dec. 15, additional U.S. tariffs are set to kick in on many Chinese-made items, including smartphones and toys. The Trump administration is already taxing more than $360 billion worth of Chinese imports. China has counterpunched by taxing $120 billion in U.S. imports.

Pressure is building on both sides to complete what Trump has called a limited "Phase 1" deal before the deadline. Still, Trump could end up postponing the tariffs, as he did in October, to allow more time for negotiations.