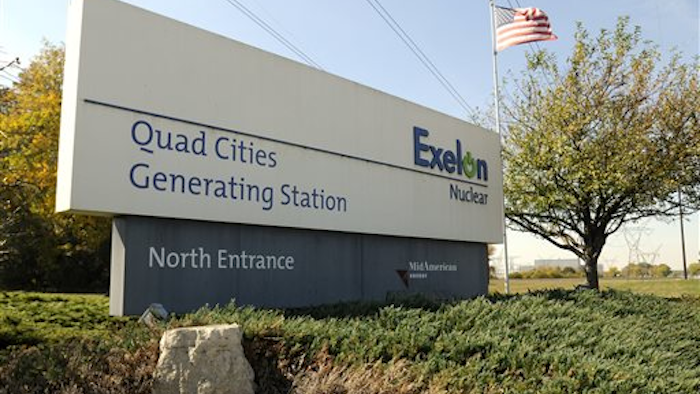 CHICAGO (AP) — Exelon Corp., which owns Illinois' 11 nuclear reactors, said Thursday that it is delaying for a year its decision about whether to close nuclear plants in the Quad Cities and Byron.

However in a new release, the company said it plans to continue operating its Quad Cities plant through at least May 2018 and the Byron plant through May 2019. The Clinton station remains "economically challenged" and could be closed if conditions don't improve, Exelon said.

The decision to delay the decision on closings came after "rigorous analysis of the present and future economics of the plants," the company said.

"Today's decision is only a short-term reprieve," Exelon president and CEO Chris Crane said. "Policy reforms are still needed to level the playing field for all forms of clean energy and best position the state of Illinois to meet EPA's new carbon reduction rules."

Exelon has said it should be rewarded for producing reliable, carbon-free electricity that will help Illinois meet an Obama administration mandate to reduce greenhouse gases. It said in the news release that it would "continue its dialogue with Illinois policymakers about market and policy reforms that properly value nuclear power for the economic and environmental benefits it provides."

Exelon wants lawmakers to approve a monthly surcharge on consumers' electricity bills that would generate about $300 million a year to reward generators that produce carbon-free electricity. Lawmakers didn't act on Exelon's bill in the spring session, and it's unclear whether it will get a hearing this fall amid a state budget crisis.

Opponents have said Exelon, which made $1.6 billion last year, doesn't need a bailout.