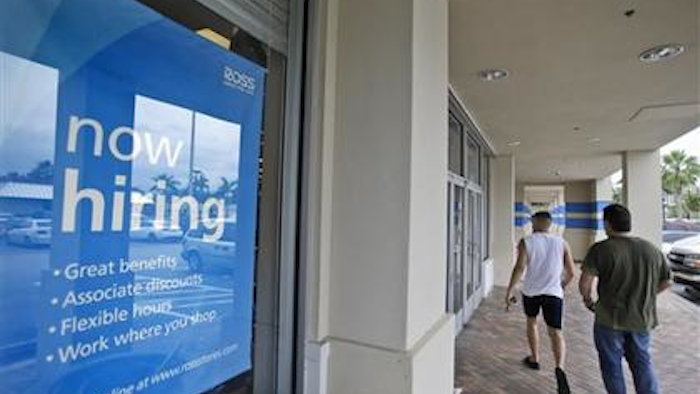 The Labor Department said Thursday that weekly applications for unemployment benefits dropped 6,000 to a seasonally adjusted 275,000. The four-week average, a less volatile measure, increased 500 to 275,750.

Benefit applications had risen 11,000 in the previous week to 281,000. But even that temporary uptick left benefit claims, a proxy for layoffs, below the 300,000 mark. Applications have been below that level for the past six months, a stretch last seen 42 years ago.

Ian Shepherdson, chief economist at Pantheon Macroeconomics, said that the result was consistent with a healthy labor market generating around 250,000 jobs per month.

"The trend in claims is steady at about 275,000, consistent with sustained strong payroll growth," he said. "Nothing in these data suggest employers have reacted badly to the drop in the stock market."

He cautioned, however, that it was too early to gauge the impact of recent market turbulence on hiring decisions in the coming months.

Last week, the government reported that the unemployment rate dropped to a seven-year low of 5.1 percent in August. That puts it at a level viewed by many economists as "full employment," which is one of the Federal Reserve's major goals for managing the economy.

The report showed that the number of people receiving unemployment benefits stood at 2.26 million for the week ending Aug. 29, up by 1,000 from the previous week.

The Fed is closely following all economic data in advance of next week's meeting when officials could decide to raise interest rates for the first time in nine years.

A key Fed rate has been at a record low near zero since December 2008, when the central bank battled to pull the economy out of the worst economic downturn since the 1930s. With unemployment down significantly from the 10 percent peak it hit during the recession, many analysts believe the Fed will see a need to start raising rates.

However, another Fed priority is keeping inflation rising at an optimal rate of 2 percent a year — a goal that has not been met. Recent developments including an economic slowdown in China, falling oil prices and a stronger dollar will likely make the inflation target harder to meet, at least in the short term.

At the moment, many economists believe the chance for a Fed rate hike in September stands at about 50-50.