By attacking trade agreements, the Republican presidential front-runner is channeling the belief, common among many of this year's angry voters, that foreign competition is robbing American jobs and shrinking wages. 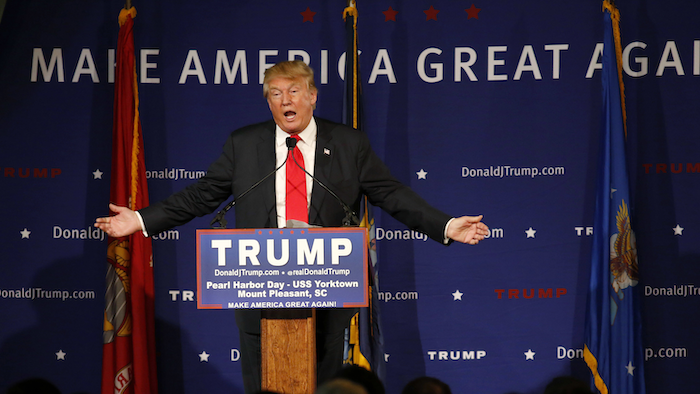 WASHINGTON (AP) — Donald Trump has promised to shred America's trade deals and impose fines on imports from Mexico and China. He's gone so far as to swear off Oreos to protest Nabisco's transfer of cookie production from Chicago to Mexico.

By attacking trade agreements, the Republican presidential front-runner is channeling the belief, common among many of this year's angry voters, that foreign competition is robbing American jobs and shrinking wages.

His assault on trade deals — which in some ways echoes arguments of Democratic candidate Bernie Sanders — seems to be winning politics. But Trump'sanalysis of how trade hurts American workers is flawed, and as president, he would struggle to deliver on his promises.

The United States does have an unbalanced trade relationship with other nations. Last year, it imported $2.76 trillion in goods and services and exported just $2.22 trillion. That $540 billion gap — the trade deficit — was the seventh-biggest on record. Not since 1975 has the United States run a trade surplus.

Trump, author of the 1987 best-seller "The Art of the Deal," argues that American negotiators are snookered by smarter deal-makers in China, Mexico and Japan who manage to penetrate the U.S. market without granting equal access to their own. He and his team, which he has said would include corporate takeover artist Carl Icahn, could easily do better, he says.

An assessment of his trade case:

Many economists call Trump's arguments off-base. Trade deals usually have little overall effect on jobs — positive or negative — partly because the American economy is already open to foreign competition. Bigger forces such as huge wage gaps between the United States and developing countries, and automation that lets companies replace workers, play a much larger role in job losses.

"We're running large trade deficits, and those do cost us jobs," says C. Fred Bergsten, director emeritus of the Peterson Institute for International Economics. "Almost none of that can be traced to trade agreements, bad, good or otherwise. Trade agreements always have a small net effect on jobs."

Economists at the Peterson Institute think the Trans-Pacific Partnership, a pending deal involving the United States and 11 Pacific Rim countries, would barely affect American employment. Jobs created by greater access to Asia-Pacific markets would likely be offset by jobs lost.

Just behind inept negotiators on Trump's list of those responsible for America's trade problems are businesses that move operations abroad to capitalize on cheaper labor.

Trump pledged to give up Oreos after Nabisco's parent, Mondelez International, said it would replace nine production lines in Chicago with four in Mexico.

He also said he would demand that United Technologies reverse a decision to move two Indiana plants to Mexico, eliminating 2,100 jobs. If it refused, he said he would impose a tax on anything the company built in Mexico and exported to the United States.

Trump also said he would tax auto imports from Mexico to stop U.S. automakers from moving production there. 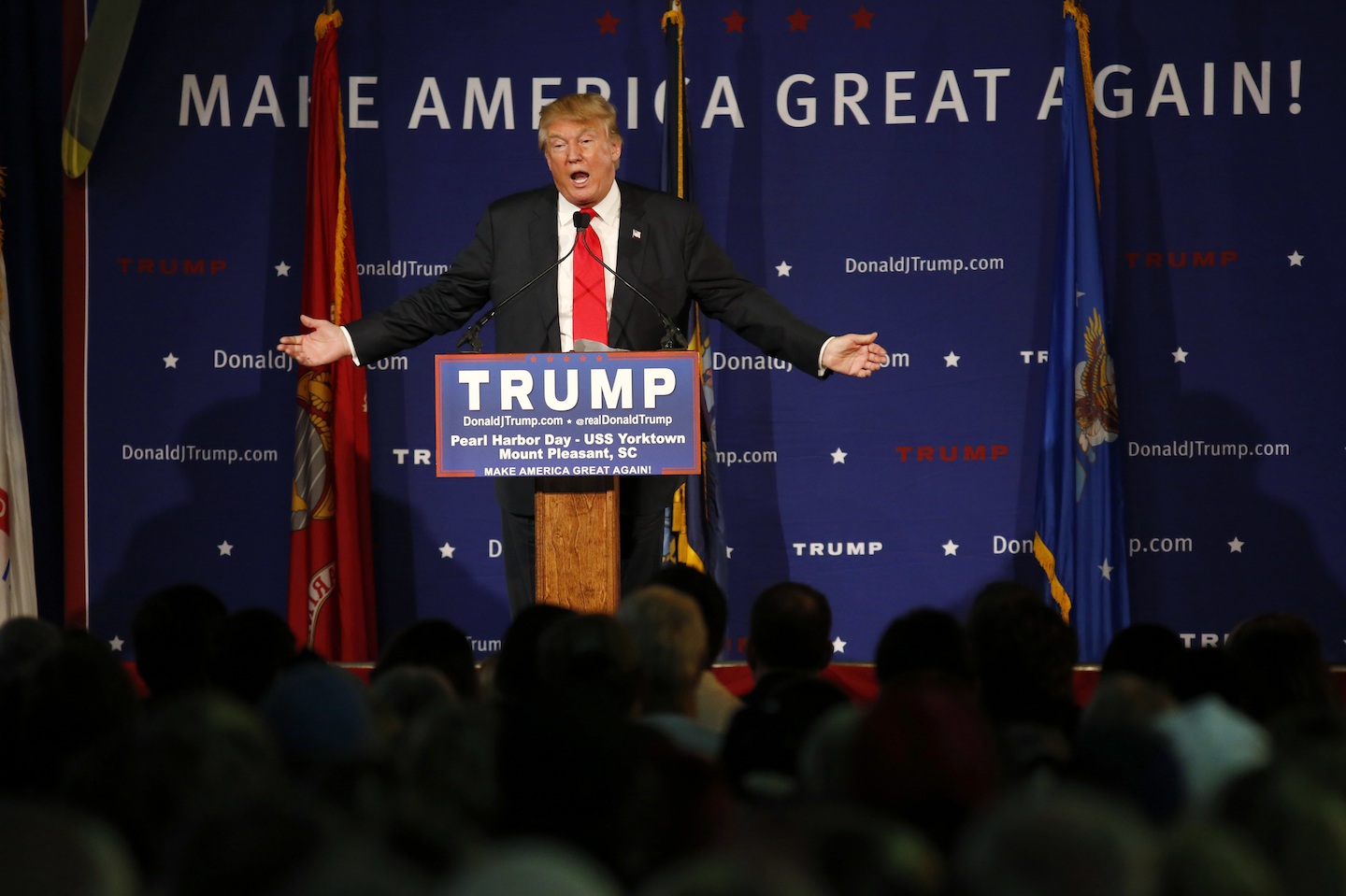 Levying those tariffs would probably require congressional approval. It would violate commitments the United States made when it joined the North American Free Trade Agreement in 1994, and the tariffs would trigger retaliation from Mexico.

He'd rip up NAFTA. He could exit the agreement provided he gave Mexico and Canada six months' notice. Experts differ on whether Congress would have to authorize this.

Regardless, leaving NAFTA would cause chaos for businesses that have arranged their operations around its rules.

Trump has threatened to hit Chinese imports with a 45 percent tariff. But in Thursday's Republican debate, he suggested that the tax might be negotiable.

"The 45 percent is a threat if they don't behave, if they don't follow the rules and regulations so that we can have it equal on both sides, we will tax you," he said on stage.

If Trump replaced the low tariffs provided by NAFTA and World Trade Organization rules with punitive tariffs on Mexican and Chinese goods, he probably would ignite a trade war that would raise prices for Americans and cause diplomatic havoc. Economists recall that the 1930 Smoot-Hawley legislation, which raised tariffs on imports, inflamed trade tensions and worsened the Great Depression.

Many analysts say Trump's approach to China is misguided, too.

He has charged Beijing with undervaluing China's currency, the yuan, to give its companies a price advantage in foreign markets.

The charge is obsolete. The yuan probably was undervalued three years ago, but it's climbed since then.

Now, economists say, the yuan actually has gone too high, partly because it's linked to a rising U.S. dollar. Left alone now, China's currency probably would plummet. So Beijing is buying yuan to prop it up.

"Does that sound like a country trying to undervalue their currency?" says Seattle trade lawyer Bill Perry.

Whatever the merits of Trump's arguments on trade, they have found an audience. More than half of Democratic and Republicans voters in last week's Michigan primary (won by Trump and Sanders) told pollsters they felt trade kills jobs.

Most economists generally promote the benefits of open trade. When foreigners can offer their goods and services, American consumers enjoy more items at better prices, and the competition makes U.S. companies more efficient.

Economists acknowledge that trade creates losers, too. But many who lose jobs can find work in other industries or move where companies are hiring.

"What we have got to do is tell corporate America that they cannot continue to shut down," Sanders said in a debate last week in Flint, Michigan. "We've lost 60,000 factories since 2001. They're going to start ... if I'm president, invest in this country — not in China, not in Mexico."

A January report on the impact of Chinese imports, from David Autor of the Massachusetts Institute of Technology, Gordon Hanson of the University of California, San Diego, and David Dorn of the University of Zurich, casts some doubt on conventional assumptions. It found that pay remains low and unemployment high for at least a decade in communities where businesses are most exposed to Chinese competition. Workers there bounce among jobs and suffer a drop in lifetime pay.

Rather than pick fights with trading partners, as Trump would, analysts favor retraining workers who lose jobs to foreign competition or giving them financial assistance to move where companies are hiring.

"The politicians have just not done a good enough job in creating the support to help workers make the transition," says Joshua Meltzer, a senior fellow at Brookings Institution.

"Why is Trump winning?" Perry asks. "He's energized a part of the lower middle class. The political system has taken them for granted. They feel threatened. And when they feel threatened, they look for a savior."