China's coal consumption has fallen for the past two years, and it has become the world's leading investor in renewable energy. 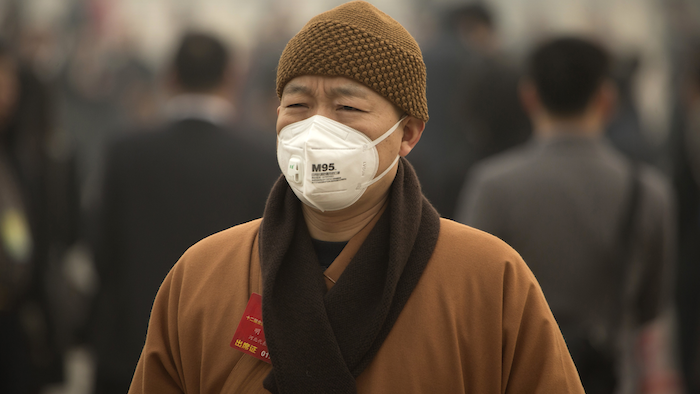 In this March 4, 2016 photo, a participant wearing a face mask arrives for a meeting ahead of the opening session of the National People's Congress (NPC) at the Great Hall of the People in Beijing. (AP Photo/Mark Schiefelbein)

China will not return to its era of pursuing economic growth at the expense of the environment despite its slowing economy, the country's environment minister said Friday.

Chen Jining said China would continue to restructure its economy away from heavily polluting companies to create more room for "good companies" to develop and focus on technological innovation, for example.

Chen pointed, however, to the need to rein in local governments, some of whom are still leery of enforcing environmental laws in favor of boosting economic growth in their areas.

"We need to hold the local governments accountable," said Chen. "Only if we hold them accountable for environmental responsibilities will the enterprises be more law-abiding."

Last year, China's economic growth slowed to a 25-year low of 6.9 percent. This year, authorities have set a growth target of 6.5 to 7 percent.

For decades, China pursued economic growth with little care of the damage to the country's environment. In recent years, the Chinese government has changed tack as it tries to move away from an economy dependent on heavy industry to a more sustainable one based on domestic consumption and services.

At the same time, China's increasingly wealthy citizens have become more concerned with the consequences of environmental pollution. 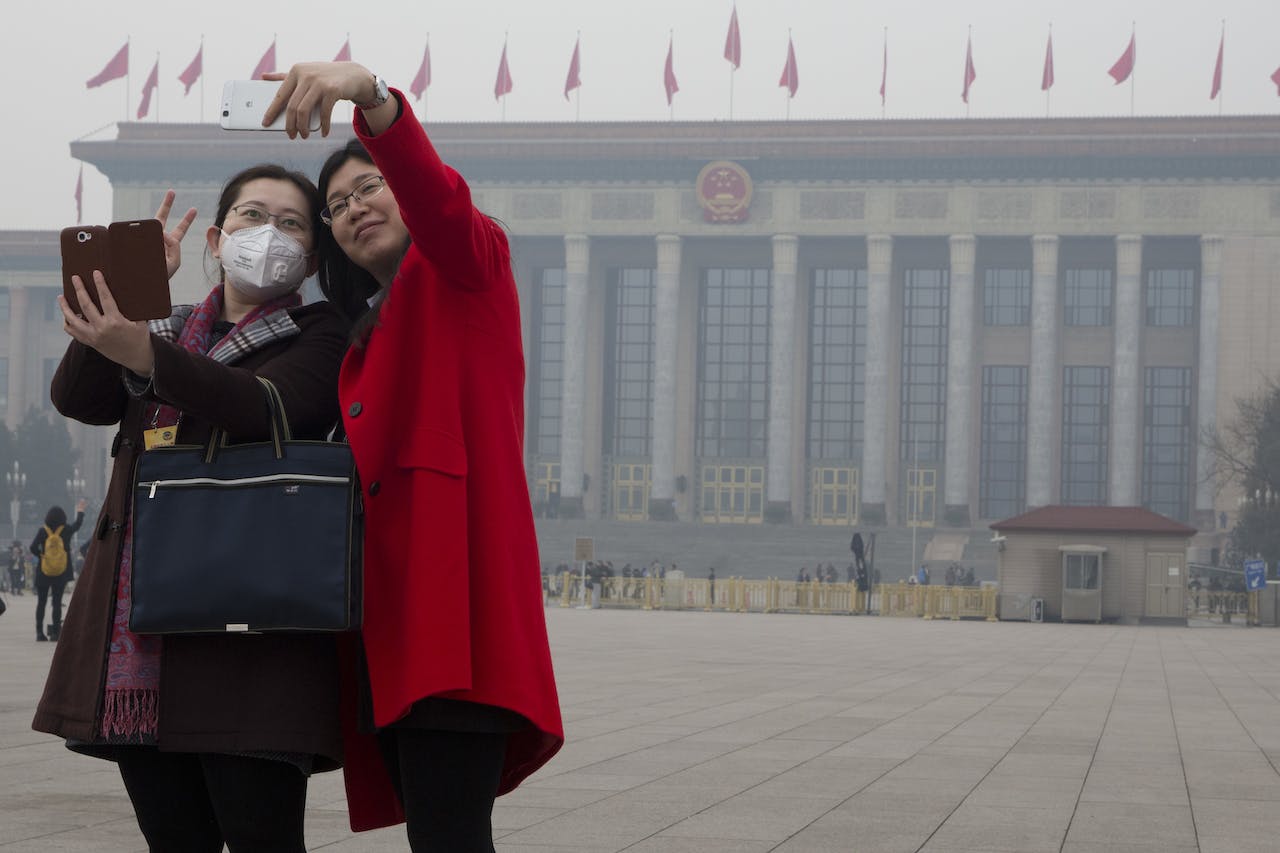 In this March 3, 2016 photo, women pose for selfies during a polluted day at the opening session of the Chinese People's Political Consultative Conference (CPPCC) in Beijing's Great Hall of the People. (AP Photo/Ng Han Guan)

"What is development? We used to equate it with GDP and production," said Chen. "We have come to believe that nature is valuable and priceless. We have abandoned the former idea of contrasting development with environmental protection but rather believe the two elements can be unified and balanced."

Today, China is aiming to transform its economic development model and pursue "economic quality, but also environmental quality," Chen told a news conference during an annual meeting of the country's legislature.

"Only when those polluters bow out of the market will it be possible to set aside some development space for good companies to focus on innovation and improving product quality, and to avoid the phenomenon of 'bad money driving out good' in our development," said Chen.

China's slowing growth, attempts to refocus its economy on services and long-term efforts to get rid of overcapacity in industries including coal and steel are helping to reduce air pollution and greenhouse gases.

But local governments' perennial push for economic growth in their cities and provinces, and state companies' tendency to spend large, can lead to projects that are at odds with central policymakers' push to clean up the area, according to environmentalists.

China is the world's largest coal user, but its coal consumption has fallen for the past two years, and it has become the world's leading investor in renewable energy. Yet China approved more than 200 new coal-fired power plants last year, with a capacity three times as much as that in each of the previous two years, according to a Greenpeace analysis published last week. It attributed the jump to a change in March last year to allow local governments to give permits, rather than central government agencies. 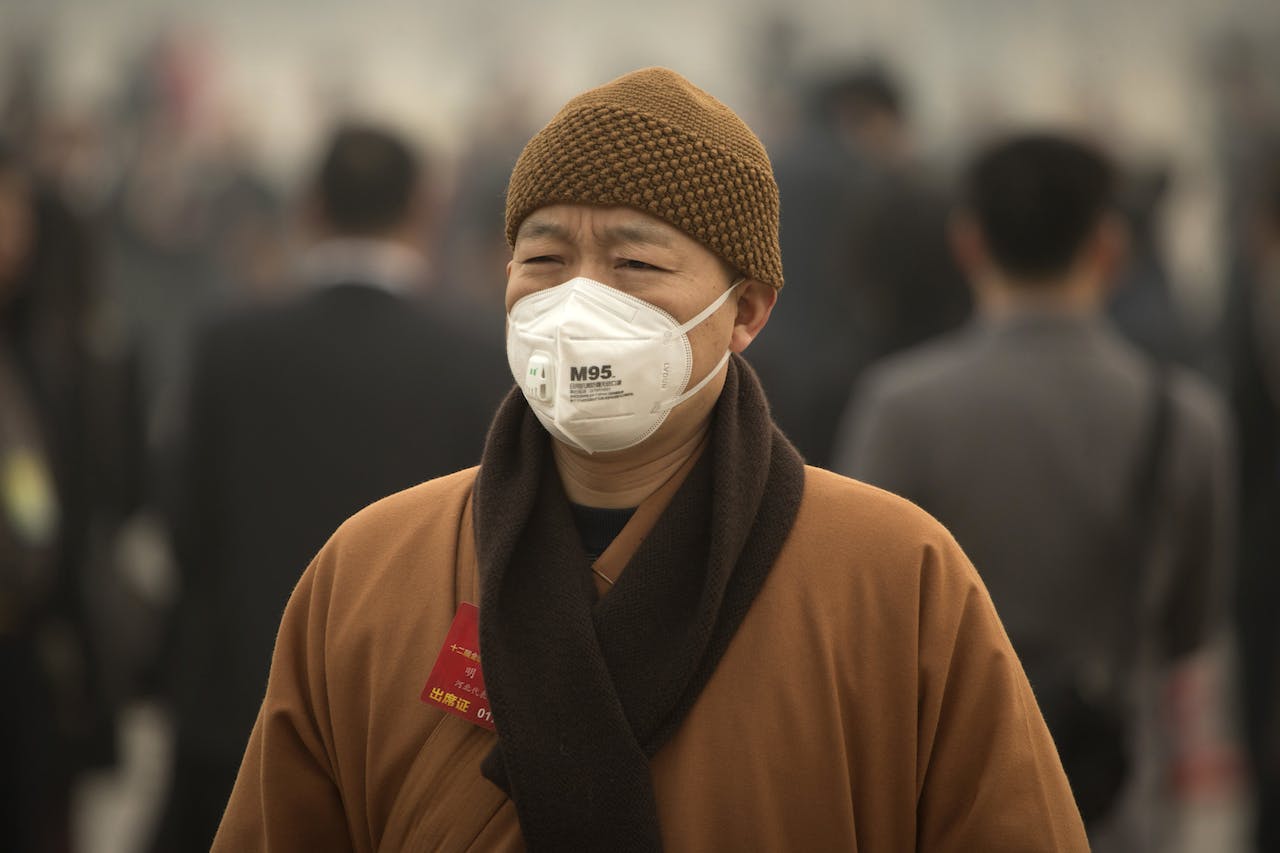 In this March 4, 2016 photo, a participant wearing a face mask arrives for a meeting ahead of the opening session of the National People's Congress (NPC) at the Great Hall of the People in Beijing. (AP Photo/Mark Schiefelbein)

"The coal bubble is an example of how their attempts to prop up GDP can lead to economically and environmentally perverse outcomes," said Lauri Myllyvirta, senior global campaigner at Greenpeace.

The building of these new plants doesn't mean an overall increasing in coal-burning because China is continuing to close down older plants, Greenpeace said. But it does mean "massive economic waste, and a missed opportunity to channel the investment spending into renewable energy, enabling even faster growth."

Shanxi, a province of coal mines, last year approved about three times as much new coal power plant capacity as the total approved for the province in the three preceding years, according to Greenpeace's report. Shanxi has suffered along with the coal industry, under pressure from the central government to get rid of overcapacity and become more efficient. In 2010, the province's GDP growth was 13.9 percent. In 2014 it was 4.9 percent, and just 2.8 percent for the first three quarters for 2015.

Chen said Friday that a new team under his ministry that has begun moving from province to province this year will hold local governments accountable for environmental protection and addressing "the harm of local protectionism."

Last week, the environment ministry announced it was setting up three separate agencies to deal with air, soil and water pollution, rather than trying to manage all three together.

China already has annual coal consumption limits in some cities and provinces and last month announced a ban on approving new coal mines until the end of 2019. Last week, the government announced it would lay off 1.8 million workers in the coal and steel sectors this year and next.

Production and shipment problems will push deliveries to 2022.
Nov 5th, 2021

The 777 Freighter is the world's largest, longest range and most capable twin-engine freighter.
Nov 4th, 2021

Toyota had been forced to reduce production because of the problems.
Nov 4th, 2021
Follow Us
Most Recent