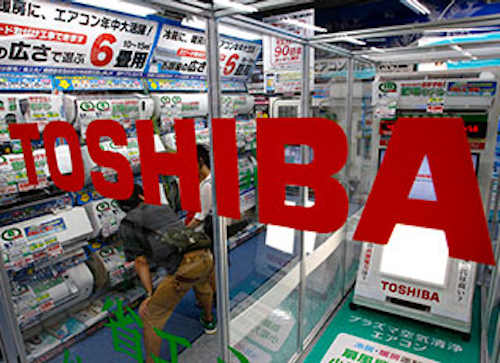 Toshiba Corp. is planning to withdraw from TV manufacturing by selling its factories abroad, following the recent revelation that the struggling Japanese conglomerate is considering proposals to consolidate its loss-making PC and white goods businesses with those of other companies, a source familiar with the move said Wednesday.

Restructuring efforts are thought to have been impeded by accounting irregularities that surfaced earlier this year, apparently obscuring faltering earnings that had been plaguing these divisions.

Toshiba's retreat from TV manufacturing highlights the company's growing focus on nuclear power infrastructure and other corporate-to-corporate operations and a shift away from its consumer businesses. It also marks the increasing relapse of Japanese manufacturers in the global home electronics market, losing ground to overseas competition.

Toshiba was the first company in Japan to develop a color television set in 1959. The TV business had since been a centerpiece of its operations for many years, best known in recent years for the Regza series of liquid crystal displays introduced in 2006.

But the division has been bleeding money since its 2011 business year in the face of intensifying competition from South Korean and Chinese manufacturers.

In 2012, Toshiba shut down its domestic TV factories. It currently builds TVs in overseas facilities such as its Indonesian plant and a jointly owned operation in Egypt.

The Tokyo-based company is expected to announce by the end of this month plans to sell these facilities to other companies abroad and pare its workforce, according to the source.

Toshiba controlled 13.4 percent of Japan's LCD TV market in 2014, the third biggest only after Sharp Corp. and Panasonic Corp., according to research company BCN Inc. Its domestic sales suffered a setback after demand for units geared for terrestrial digital broadcasting ran its course a few years ago.

The Regza brand appears to be up for sale to an overseas manufacturer, the source said, leaving the possibility that the brand may survive and continue to be sold in Japan even after Toshiba's exit.

Toshiba is considering a plan to merge its PC business with those of Fujitsu Ltd. and Vaio Corp., a former Sony Corp. unit. Its white goods operation may be sold to Sharp under another plan.

In the semiconductor business, Toshiba has already decided to seek early retirements and transfer jobs to other divisions, affecting around 1,200 workers. Part of the chip operations will be sold to Sony.

Toshiba reported 90.49 billion yen ($745 million) in consolidated operating loss for the semiannual period through Sept. 30, suffering a blow particularly in the home electronics divisions such as TV, PC and white goods.

The Securities and Exchange Surveillance Commission recommended on Monday that the government's Financial Services Agency assess a record 7.37 billion yen fine for falsifying earnings reports. Accounts in the TV and other businesses were manipulated by overstating or understating costs or through other dubious practices.

Toshiba and a group of shareholders have filed separate lawsuits against former executives over damages caused by the scandal.