The address will be wrapped in a unifying theme: The federal government can play a key role in increasing opportunities for Americans who have been left behind, unable to benefit from a recovering economy. Yet, at the core of the address, the president will deliver a split message. 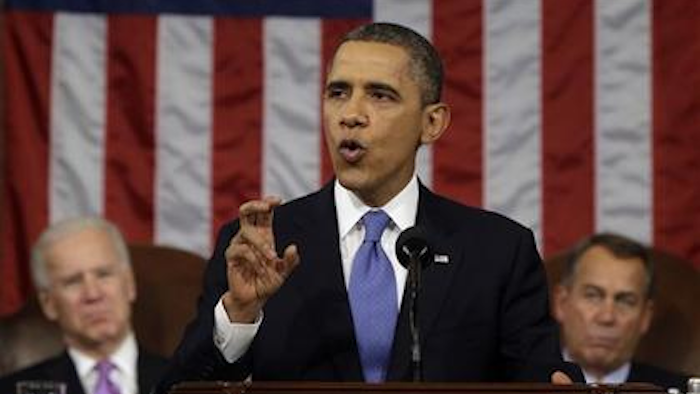 WASHINGTON (AP) -- Newly repackaged, President Barack Obama's State of the Union address will deliver familiar content along with some targeted first-time initiatives that both test and illustrate the limits of divided government in an election year.

His message to a joint session of Congress on Tuesday will identify measures where he and Congress can cooperate, and he will press issues that will distinguish him and Democrats from Republicans. He'll also make a case for acting alone.

Illustrating his willingness to act on his own, the White House says Obama will announce that he will sign an executive order increasing the minimum wage from $7.25 to $10.10 for new federal contracts. The measure affects only future contracts, not existing ones, and would only apply to contract renewals if other terms of the agreement changed. As a result, the order would benefit far fewer workers than the number foreseen by advocates of federal contract employees.

The address will be wrapped in a unifying theme: The federal government can play a key role in increasing opportunities for Americans who have been left behind, unable to benefit from a recovering economy. Yet, at the core of the address, the president will deliver a split message.

Even as he argues that low income Americans and many in the middle class lack the means to achieve upward mobility, Obama will also feel compelled to take credit for an economy that by many indicators is gaining strength under his watch. As a result, he will talk positively about a recovery that remains elusive to many Americans.

Some Democrats are warning Obama to tread carefully.

"We hope that he does not dwell on the successes of the economy, which may be apparent in employment statistics, the GDP and stock market gains, but which are not felt by folks at the grocery store," Democratic political analysts James Carville and Stan Greenberg wrote in a recent strategy memo.

The president will present Congress with an agenda largely unchanged from what he called for a year ago, but one that nevertheless fits neatly into this year's economic opportunity theme. He will continue to seek an overhaul of immigration laws, an increase in the minimum wage and expanded pre-school education.

But after a year in which those proposals languished and gun control failed, the White House is eager to avoid letting Obama be defined by quixotic ambitions. As a result, he will stress success through executive actions, though their reach would be far more modest than what he could achieve through legislation.

"It's not a question of looking at Congress," White House chief of staff Denis McDonough said on Tuesday morning. "As we sit here and try to make sure there's access to good jobs, we're going to roll out on our own. Congress is slow to action and we're not going to wait for that," he said in an interview on "CBS This Morning."

Appearing on NBC's "Today" show, McDonough said Obama is not concerned about his public approval ratings as he enters the sixth year of his presidency. "The president doesn't come down to work every day or go up to the residence every night worried about poll numbers," his chief of staff said.

"People in our country are hungry for action. And what you're going to hear from the president tonight is all about action," senior adviser Valerie Jarrett said on MSNBC

Obama's biggest and most lasting accomplishment of his second term could be immigration legislation. House Republican leaders lately have sent signals that they are willing to act on piecemeal legislation, and Obama has given them room to work without prodding.

How immigration gets resolved will depend much on what the House is able to pass and if and how it can be reconciled with bipartisan Senate legislation that passed last year. Conservatives are pushing back against any bill that gives legal status to immigrants who are in the country illegally. And some Democrats would prefer to use the unresolved issue to mobilize Hispanic voters for this year's midterm elections.

Eager not to be limited by legislative gridlock, Obama on Tuesday is expected to announce executive actions on job training, retirement security and help for the long-term unemployed in finding work — all in addition to his order to increase the minimum wage on new federal contracts.

Among them is a new retirement savings plan geared toward workers whose employers don't currently offer such plans. The program would allow first-time savers to start building up savings in Treasury bonds that eventually could be converted into a traditional IRAs, according to two people who have discussed the proposal with the administration. Those people weren't authorized to discuss it ahead of the announcement and insisted on anonymity.

"Tomorrow night, it's time to restore opportunity for all," Obama said Monday on the video-sharing site Vine, part of the White House's broad social media promotion of the speech.

Obama's go-it-alone approach has already irritated Republicans, some of whom claim he is pushing the limits of the Constitution; others diminish his initiatives as insubstantial.

"He can work with us to create opportunity and prosperity," wrote Brendan Buck, a spokesman for House Speaker John Boehner, R-Ohio. "Or he can issue press releases."

"The more he tries to do it alone and do confrontation, the less he's going to be able to get cooperation," said John Feehery, a former top House Republican aide.

Obama will follow his State of the Union address with a quick trip Wednesday and Thursday to Maryland, Pennsylvania, Wisconsin and Tennessee to promote his proposals. On Friday, Obama will hold an event at the White House where he'll announce commitments from several companies to not discriminate against the long-term unemployed during hiring.

Following tradition, the White House has invited several people to sit with first lady Michelle Obama during Tuesday night's address. Among them are General Motors CEO Mary Barra and Cristian Avila of Phoenix, an immigrant who with two younger siblings was brought to the U.S. illegally when Avila was 9. Now 23, Avila is one of the so-called Dreamers who have benefited from an Obama policy allowing young people who immigrated illegally with their parents to avoid deportation.

China is likely to be the only major economy to grow in 2020, while developed countries and most major emerging markets were in recession.
Jan 18th, 2021
Follow Us
Most Recent