Obama In N.C. To Advance Goals On Economy and Jobs

President Barack Obama on Wednesday sought to push Congress to promote 21st-century manufacturing jobs by establishing hubs where universities and companies work together to invent, design and make new products. 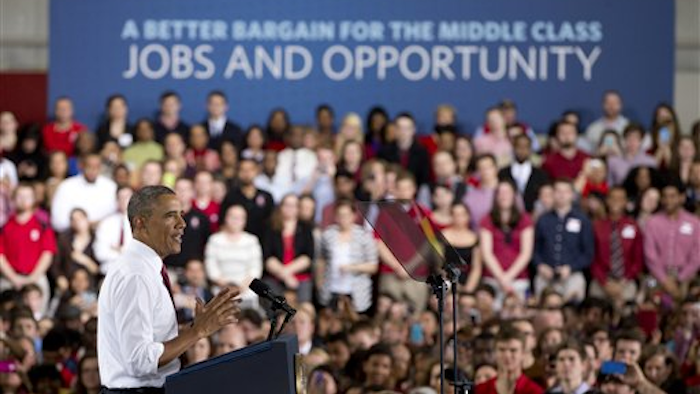 The first such hub will be based at North Carolina State University and the Obama administration plans in coming weeks to announce two more hubs, led by the Pentagon, to foster digital manufacturing and modern metals innovation.

The White House wants to establish up to 45 such institutes, but that will require legislation from Congress so they are funded. The first three are being funded with existing resources.

Obama was expected to foreshadow part of his State of the Union Address during a speech at North Carolina State promoting advanced manufacturing, which many believe is key to an economy that offers well-paying jobs for middle-class workers.

The initial consortium will seek to invent, design and make new semiconductor chips and devices for industrial and everyday electronics. Headquartered in Raleigh, it will receive $70 million over five years from the U.S. Energy Department and at least $70 million more from the universities, businesses and the state, the White House said.

"This is all about bringing back electronic manufacturing to the United States. It's about creating the next generation of power devices that are more efficient at using electricity and do so with less heat loss," N.C. State Chancellor Randy Woodson said. "This is the next generation of semiconductors to replace the silicon chip. We have a great collection of scientists here and we're in a part of the country, a hub in the United States, where a lot of this activity is turned into products."

Obama visited a Vacon research center and lab in nearby Research Triangle Park. The Finland-based company manufacturers AC drives, which are used to control the speed of electric motors to maximize energy efficiency.

Obama's visit comes as North Carolina's Republican Gov. Pat McCrory is also emphasizing manufacturing jobs in a state where about a fifth of the economy comes from making things.

There were promising signs in the past year of manufacturing's place in a rebounding economy.

Computer maker Lenovo Group began manufacturing in the U.S. for the first time, choosing a North Carolina site over low-cost foreign locations such as Mexico or China because it meant quicker turnaround and custom products. GE Aviation broke ground on a new factory to produce engine components made of advanced ceramic materials that are ultra-lightweight and can handle extremely high temperatures in jet turbines.

North Carolina manufacturing and construction jobs are expected to see the biggest boosts in 2014, a year in which the state finally sees a sustained recovery from the lingering effects of the Great Recession, University of North Carolina Charlotte economist John Connaughton predicted in a report released Wednesday.

North Carolina Republicans criticized Obama's failure to fix the economy after the government reported just 74,000 new jobs nationwide in December and a dip in unemployment. They credit GOP state lawmakers and McCrory for contributing to a 2 percentage-point drop in the state's unemployment rate in 2013 by cutting taxes and slashing regulations. The national jobless rate dropped last year by less than 1 percent.

While North Carolina's November unemployment rate dropped to its lowest rate in more than five years, the data also suggested worker discouragement. The total number of working-age residents either working or looking for jobs fell by 95,000 in the past year.

Hagan did not visit her home state with the president. Pope said she was avoiding being closely linked to Obama, who lost North Carolina in 2012, as a tough re-election race looms ahead of her this year. Her office said she wouldn't be in Raleigh because the Senate is working.