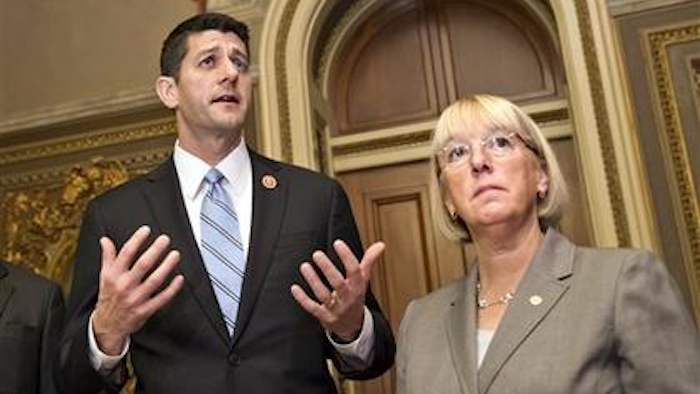 WASHINGTON (AP) — Negotiators trying to put the finishing touches on a $1.1 trillion spending bill reported Tuesday that they have made major progress in recent days in advance of a meeting of the four principal negotiators later in the day.

Sticking points remain, including language that would give the administration flexibility to certify that Egypt qualifies for U.S. military aid despite a law that bans such aid after coup d'etats, said Sen. Lindsey Graham, the top Republican on the foreign aid panel.

Sen. Tom Harkin, D-Iowa, responsible for a massive section of the measure funding the Labor and Health and Human Services departments, said that his bill is 90 percent done but that hang-ups remain. They include differences over funding to implement the new health care law and GOP-sought provisions to effectively block several union-friendly decisions by the National Labor Relations Board, including a 2011 NLRB move that made it more difficult for anti-union workers to petition to decertify a union.

"I'm hopeful. We've made good progress and we're going to meet later today," said Sen. Richard Shelby of Alabama, top Republican on the Senate Appropriations Committee. "We'll have a better idea of how we're running then."

The goal is to finish writing the mammoth measure this week in anticipation of House and Senate votes before a Jan. 15 deadline to avert another government shutdown, but as a practical matter Congress will likely have to pass a temporary funding measure to avoid a government shutdown after midnight next Wednesday. The bill fills in thousands of details across the approximately one-third of the federal budget devoted to the day-to-day operations of federal agencies.

The omnibus spending bill follows up on the budget pact negotiated by House Budget Committee Chairman Paul Ryan, R-Wis., and Senate Budget Committee Chairwoman Patty Murray, D-Wash, as the anticlimax to a 16-day partial government shutdown in October. A fresh battle over increasing the so-called debt limit looms next month, however, even as the threat of a second government shutdown fades.

The budget deal, which easily passed the House and Senate last month, traded longer-term spending cuts and some fee increases for short-term relief from last year's automatic spending cuts. The process could be compared to building a house: Last month's deal laid the foundation; this month, the House and Senate appropriations committees build the frame, put up the walls and finish the interior.

The measure includes everything from fighting the spread of the Asian carp into the Great Lakes, ordering new F-35 fighter planes and funding health research to fighting wildfires, sending aid to Israel and Egypt, and helping local governments build sewer systems. The spending is allocated line by line. Appropriations committee aides worked pretty much nonstop over the Christmas-New Year's holiday break putting it all together.

Even by the opaque standards of the appropriators, the numbers crunching the past three weeks has been remarkably secretive. The negotiations promise to produce a foot-tall omnibus spending measure for the 2014 budget year that began in October that'll total about $1.1 trillion after $86 billion or so in war funding is tacked on to $1.012 trillion for core agency operations.

That's $25 billion above fiscal 2013, when automatic spending cuts known as sequestration slashed $64 billion from a massive appropriations bill that passed in March. But it is $45 billion higher than what would have been available had the budget talks fallen apart and forced a second full year of sequestration.

But the glass-half-empty view is that this appropriated spending in 2014 will be more than $30 billion below what was originally contemplated for 2013 and $46 billion below levels contemplated in the 2011 budget deal. And the even flusher times when Democrats controlled Congress are a fading memory. Liberals are bracing for shortfalls in subsidized housing and heating aid for the poor.

Supporters of the military, meanwhile, are grateful for relief from another $20 billion round of automatic cuts in defense spending. The Pentagon's core budget will remain essentially flat at $520 billion, with just a $2 billion increase over the post-sequestration level for 2013 that caused furloughs, harmed readiness and slowed weapons procurement.

"They are just looking for some predictability, stability," said Rep. Rodney Frelinghuysen, R-N.J., chairman of the House subcommittee that writes the Pentagon's budget. "I think we have it."

Successful action would cap a remarkably dysfunctional year for the appropriations process, which used to dominate the House and Senate floors every summer as lawmakers worked long hours and full weeks banging out the annual bills, voting on hundreds of amendments and debating numerous policy provisions on topics spanning abortion, environmental regulations and annual cost-of-living pay increases for lawmakers.

It's clear, however, that the appropriations committees have lost some of their powers. They're no longer able to "earmark" pet projects like roads and bridges, economic development initiatives or grants to local governments into the bills because of a ban engineered by House Speaker John Boehner, R-Ohio. That makes it harder to build support for their bills.

And the spending cutbacks since Republicans took back the House leave little room for new initiatives that allow them to put their stamp on agencies. Instead, the two dozen appropriations subcommittee chairmen, once referred to as "cardinals" because of their power over the purse and ranking minority members, now spend a lot of effort troubleshooting and filling holes.