The number of people seeking U.S. unemployment benefits rose 68,000 last week to a seasonally adjusted 368,000, the largest increase in more than a year. The surge in first-time applications could be a troubling sign if it lasts. But it likely reflects the difficulty adjusting for delays after the Thanksgiving holiday. 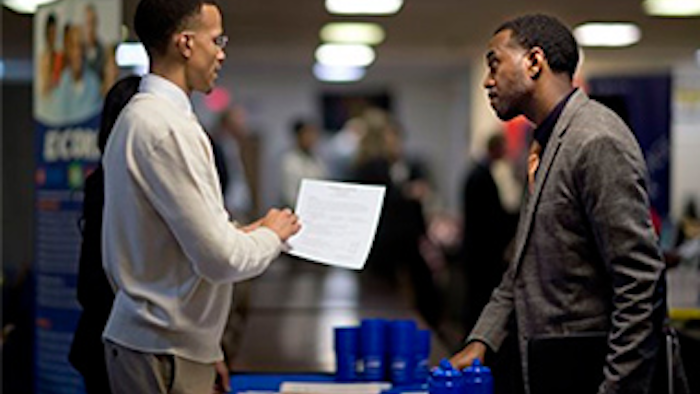 WASHINGTON (AP) — The number of people seeking U.S. unemployment benefits rose 68,000 last week to a seasonally adjusted 368,000, the largest increase in more than a year.

The surge in first-time applications could be a troubling sign if it lasts. But it likely reflects the difficulty adjusting for delays after the Thanksgiving holiday.

The Labor Department said Thursday that the less volatile four-week average rose 6,000 to 328,750. That is close to pre-recession levels and generally a positive sign for job gains.

Applications had tumbled in recent weeks to nearly six-year lows, partly because of a late Thanksgiving holiday that may have distorted the government's seasonal adjustments. Economists believe this week's jump in claims was a dose of payback.

"What the seasonals give in one month they have to take back the next, hence today's number," said Ian Shepherdson, chief economist at Pantheon Macroeconomics.

Applications for unemployment aid are a proxy for layoffs. A steady decline over the past year suggests that fewer Americans have lost their jobs. Economists will track the next few weeks closely to see if that trend is reversing, or if the surge is a temporary blip caused by seasonal adjustments.

The recent drop in layoffs has coincided with a pickup in hiring. The economy has added an average of 204,000 jobs a month from August through November, up from an average of 146,000 in May through July.

Employers added 203,000 jobs last month and the unemployment rate dropped to a five-year low of 7 percent, the government said Friday. Four straight months of robust hiring have raised hopes that 2014 will be the year the economy returns to normal. As more Americans draw a paycheck, incomes and consumer spending generally increase. About 70 percent of economic activity comes from consumer spending.

However, the unemployment rate remains above the historic averages of 5 percent to 6 percent that are associated strong job markets.

A healthier job market could make the Federal Reserve scale back its extraordinary economic stimulus programs. The Fed has been buying $85 billion in bonds each month to keep long-term interest rates low and encourage borrowing and spending.

More than 3.8 million people collected some form of unemployment benefits in the last full week of November.

However, 1.25 million of them could soon lose those benefits. They received aid under a special federal program for the long-term unemployed that is set to expire on Dec. 28.

The program extends aid that usually expires after six months for an additional 28 weeks. Congressional leaders have proposed a budget deal that would not preserve the additional benefits, meaning that as many as 2.1 million Americans will lose this assistance by March.