Retirement Unlikely For Some Blue-Collar Americans

Many have jobs that provide paltry pensions or none at all, as many companies have been moving toward less generous retirement packages in the past decade. Many boomers expect to work the rest of their lives because they have little cash put away for their old age and they worry Social Security won't cover their bills. 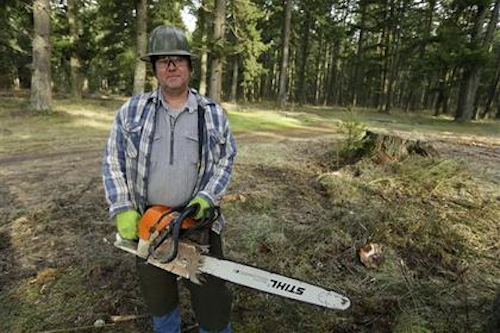 Tom Edwards grew up in a family that's been cutting trees and hauling timber in the Pacific Northwest for more than a century. The Spanaway, Wash., resident says he has worked as a logger since he was a kid — it's just what an able-bodied youngster was expected to do.

Now, at 53, with business in a slump and little money in savings, he's pessimistic about his chances of retiring.

"It's never going to happen. By the time I reach retirement age, there won't be Social Security. There's not going to be any money," Edwards said. "I'll do like my father did: I'll work 'til I die."

Across the U.S., such concerns are common among blue-collar baby boomers — the 78 million Americans born between 1946 and 1964. Many have jobs that provide paltry pensions or none at all, as many companies have been moving toward less generous retirement packages in the past decade.

Many boomers expect to work the rest of their lives because they have little cash put away for their old age and they worry Social Security won't cover their bills. Some hope to move to jobs that are less physically demanding.

The book is edited by Mo Wang, co-director of the Human Resource Research Center at the University of Florida's Warrington College of Business Administration. In an interview, Wang said it's a misconception that lower-wage workers are slackers in preparing for retirement.

"People don't have adequate earnings," Wang told The Associated Press. "It's not because they don't want to save. It's because they just can't."

Many people don't save enough for their own retirement because they lack financial literacy skills, Wang said. Also, he said it can be incorrect to assume that people with lower incomes have more financial concerns than people with higher incomes. Psychologically, the important thing is the ratio of life earnings to wealth — how much money a person earns in a life span, compared to how much of it she gets to keep.

People can receive full retirement benefits from Social Security between 65 and 67, depending on when they were born, and Medicare coverage at 65.

Farmers, loggers and other agriculture workers often have their wealth tied up in their homes or work property. Business consultant Mike Salisbury of American Falls, Idaho, has spent more than three decades helping farmers plan their financial futures. He said the biggest concern for most is succession — whether any children want the farm once a farmer retires.

"Now, statistics pretty well show that about two-thirds of farm families do not have successors interested in coming back into the business," Salisbury said.

Without someone to take over the family business, farmers look for an exit strategy, he said. "There are some really complex tax ramifications for when a farmer decides to stop farming."

He said farmers approaching retirement want to know how to convert the equity in their land, fixtures, buildings and machinery into cash without having to pay the upper tax rates or having to pay taxes in a lump sum the day assets are sold.

"We like to think of our farmers as just barely getting by and dirt poor," Salisbury said. "For the vast majority of farmers today, the ones that survived the economic crash of the '80s, they're probably in pretty good shape."

People who've worked low-wage jobs for decades, such as 46-year-old Catherine Bacon of Durant, Miss., say they have a tough time envisioning an affordable retirement, even if that goal is decades away. Bacon worked 21 years in a catfish processing plant, cutting filets and hoisting bags of fish to make sure they weighed 15 pounds, never earning more than $16,000 a year. To supplement her income for nine of those years, she also worked weekends as a convenience store cashier. The seven-days-a-week routine meant she rarely saw her two oldest daughters when they were young.

The kind of retirement many Americans envision — travel, hobbies, leisure time without financial stress — is just a wistful fantasy for her.

Bacon is a single mother with two grown children and two younger children still living at home. Sitting at the kitchen counter of the double-wide trailer she rents from one of her sisters, she sighed.

"I haven't given up on living," Bacon said. "It's just, certain things I want to do, I know I won't do them. Traditional retirement — I won't have that."

Some blue-collar workers have employers who chip in toward retirement.

In Atlanta, 41-year-old Jason Baumgartner works as a master carpenter, helping build luxury homes. He said his employer contributes to a Roth IRA for him, and he puts in some money each week, as well. He and his wife have a son who's about to turn 2, and they've consulted a financial planner. He said he wants to save enough money to start his own business and work for himself rather than for somebody else.

In the southern Louisiana fishing village of Lafitte, Robert Boudreaux's cut and callused hands worked quickly, spinning, looping and threading twine that would, when finished, be a fishing net used by fishermen to trawl for shrimp in the Gulf of Mexico. It's a trade Boudreaux, 52, has practiced for decades in the small net shop he owns — and something he may end up doing longer than he had anticipated.

"To plan for retirement in today's economy is very, very hard because people who started planning for retirement years ago put money on the side in IRAs and stuff like that, and the way the economy is and the interest rate is, they don't get anything anymore," Boudreaux said.

Boudreaux said he opened his net shop in 1980 and has also been a part of a family boat-making business since 1981. He said he invested thousands into IRAs that today are worth very little. It's disappointing, he said, but the good news is that he loves what he does and probably wouldn't retire even if he had the means.

"Most of the people that's in the community — that's fishermen, that's small business owners — they don't retire," he said. "They work until they pass on."