Falling gas prices. Soaring stock market. Unemployment at a six-year-low. All signs point to a successful holiday shopping season. Despite the economic tail winds, though, retailers are finding themselves having to work to get shoppers into stores. Why? Five years into the economic... 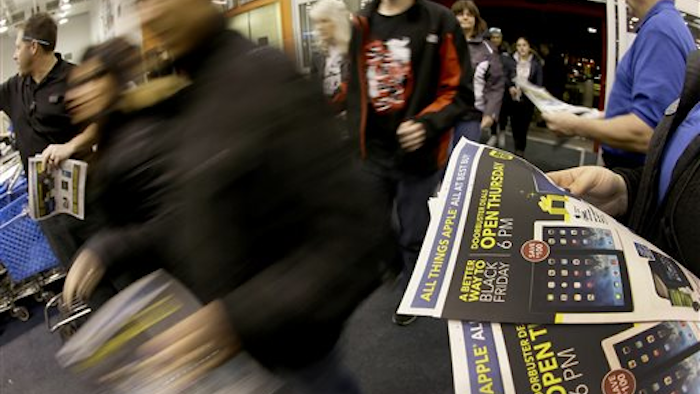 All signs point to a successful holiday shopping season. Despite the economic tail winds, though, retailers are finding themselves having to work to get shoppers into stores.

Why? Five years into the economic recovery, most Americans still are struggling.

Gas prices may be hovering at a four-year low, but Americans are paying more for food, health care and other costs. Unemployment is falling, too, but wage growth has been stagnant. And even though the stock and housing markets have improved, Americans haven't changed their deal-hungry shopping habits.

"Retail therapy is out the window for most Americans," said Ken Perkins, president of RetailMetrics LLC, a research firm.

Not that this holiday season is expected to be a dud. In fact, the National Retail Federation forecasts holiday sales will grow 4.1 percent to $616.9 billion — the highest increase since 2011. But retailers already have had to resort to discounting to get shoppers into stores.

But heavy discounting eats into profits. For example, over the past weekend, online sales rose 18.7 percent, but the average order value was $112.86, down 5.4 percent for the same period a year ago because of promotions, according to IBM Digital Analysts Benchmark, which tracks sales at 800 websites.

Reflecting the tough environment, major department stores, including Macy's, J.C. Penney and Kohl's, reported sales shortfalls in the quarter preceding the holiday shopping season. Discounters like Target and Wal-Mart turned in better-than-expected sales, but acknowledged that shoppers are cautious.

Take Amanda Simpson, 39, who works in public relations in Denton, Texas. The mother of two young children plans to spend $700 on holiday gifts, down from last year's $1,000.

Simpson says now that the economy is improving, she's focusing on building her savings. She and her husband, a government worker, are juggling daycare costs and higher health care expenses. Even the extra $20 a week from falling gas prices is going toward bills.

"I definitely feel better," she said. "But as a family, we are trying to be more fiscally conservative."

Here are three reasons many Americans plan to spend conservatively this holiday season, even though economic factors have improved:

Paychecks have barely stayed ahead of inflation since the recession ended more than five years ago.

Average hourly wages, adjusted for inflation, rose just 0.3 percent in September from a year earlier. And many Americans, who once worked full time now have part-time jobs. There are still nearly 2 million fewer people working full time in December 2007, when the Great Recession began.

That's one reason shoppers might not spend briskly during the holiday despite the fact that the U.S. jobless rate hit 5.8 percent last month, down 1.5 percentage points from a year ago.

Gas prices have fallen 20 percent from a year ago to $2.81. While that puts an average of $50 a month into the pockets of American households, they're still grappling with higher costs on lots of other necessities like food and health care.

Overall food prices are up 1.7 percent from a year ago, according to the latest Consumer Price Index. Meat prices are up 8.5 percent, while egg prices rose 6.7 percent.

While Wal-Mart noted lower gas prices have helped to fuel more trips to the store, it said shoppers at its Sam's Club stores are trading down from red meat to chicken and ground beef.

J.C. Penney's CEO Mike Ullman told investors he expects customers will still be "very savvy" this holiday season even if they have more money to spend because of low fuel prices.

Shoppers may feel a little better about the overall economy, but they're still focused on a deal. And they're still sticking to lists.

According to a recent survey of 500 shoppers by Accenture, 29 percent said it would take a discount of 50 percent or more to persuade them to make a purchase. Two years ago, that figure was 21 percent.

That's why a number of retailers have been heavily discounting holiday items all month. Many, including Target and Wal-Mart, have pulled forward some of the deals reserved for Black Friday.

A survey of 100 retailers by BDO, a consultancy, found that 34 percent will have already run most holiday deals by the time shoppers sit down for their Thanksgiving dinner.