The White House is working feverishly to quickly scuttle a congressional effort to permanently renew generous tax breaks for businesses and individuals, saying a plan brewing on Capitol Hill favored corporations over the working class. Speculation on Capitol Hill... 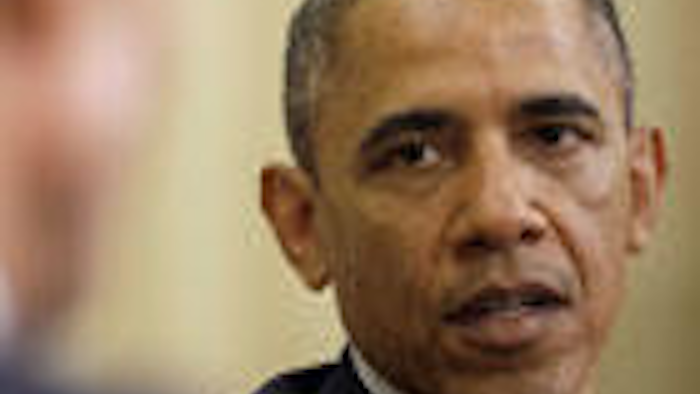 The White House is working feverishly to quickly scuttle a congressional effort to permanently renew generous tax breaks for businesses and individuals, saying a plan brewing on Capitol Hill favored corporations over the working class.

Speculation on Capitol Hill on Tuesday focused on a potential agreement to permanently enact tax breaks on business investments in new equipment and research and development as part of a plan that would renew dozens of expired tax breaks for businesses and individuals both.

The White House immediately weighed in with a veto threat, saying Congress should also make permanent a top Obama administration priority, extending more generous tax credits for the working poor and people with children. They were left out of the potential pact and expire at the end of 2017; Democrats fear they won't be renewed if Republicans control Congress or retake the White House.

"The president would veto the proposed deal because it would provide permanent tax breaks to help well-connected corporations while neglecting working families," Deputy White House Press Secretary Jennifer Friedman said. A senior White House official said the president was personally working the phones to try to kill the plan.

The White House veto threat appeared to put the plan on ice, though negotiations will continue.

At issue are dozen of expired tax breaks, known as "extenders" in Washington parlance. They are generally renewed every year or two and have broad political backing from both Democrats and Republicans. They expired last year and action now would extend them retroactively in time for individuals and businesses to claim them in the upcoming filing season.

In trade-offs that angered the administration but gave political wins to top Senate Democrats, the emerging pact would also have made permanent tax breaks for college tuition, parking and transit subsidies, and a deduction for state and local sales taxes.

"The president has consistently stated his opposition to giving hundreds of billions of dollars of tax cuts primarily geared toward corporations while leaving middle class families and those struggling to get into the middle class behind," said Jason Furman, chairman of the White House Council of Economic Advisers.

The possible agreement, Democratic aides said, was being negotiated between House Republicans and top Senate Democrats like outgoing Majority Leader Harry Reid, whose state of Nevada benefits from the state and local sales tax deduction. Senate Democrats were seeking the best deal they could while retaining leverage but the emerging outline infuriated the White House because it was so favorable to businesses.

The aides insisted on anonymity to discuss ongoing talks.

The cost of the outline under consideration could have reached $450 billion over the coming decade and would have been financed entirely by adding to the $17.9 trillion national debt.

"The price tag is a result of irresponsible horse trading whereby each side got to claim its favorite tax break without paying for it," said Maya MacGuineas, president of the Committee for a Responsible Federal Budget, which advocates for lower deficits.

Dozens of other tax perks would have been extended through the end of next year, including breaks for improvements at NASCAR tracks, race horse owners and manufacturers of electric motorcycles. Other extenders include tax credits for biodiesel, a tax credit for coal produced in Indian country, and breaks for energy efficient homes and commercial buildings.

Many of the breaks are criticized as wasteful, inefficient and archaic, but their collective weight has always powered them through Congress. Critics did claim one casualty: a much-criticized tax credit for wind power, which would phase out in three years. Some of the biggest supporters of the credit, however, are Midwestern Republicans.