U.S. consumers spent modestly more in October, a slight improvement after no gain at all in the previous month. The Commerce Department said Wednesday that consumer spending rose 0.2 percent last month, while September was revised from a decline to a flat.. 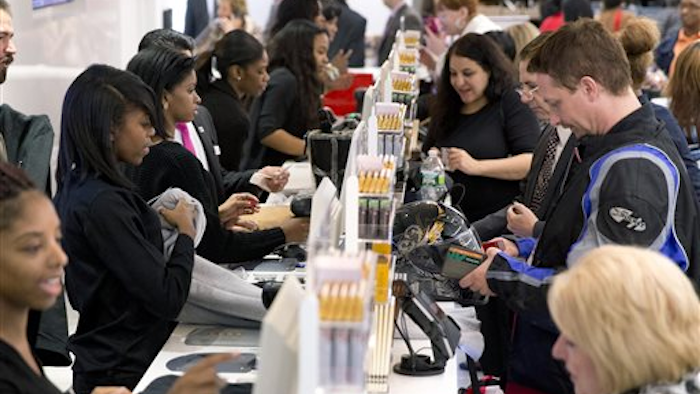 U.S. consumers spent modestly more in October, a slight improvement after no gain at all in the previous month.

The Commerce Department said Wednesday that consumer spending rose 0.2 percent last month, while September was revised from a decline to a flat reading. Income grew 0.2 percent in October.

Spending is closely watched because it accounts for 70 percent of economic activity. Solid job gains this year are helping to lift spending, which is bolstering the overall economy.

The U.S. economy grew at a solid 3.9 percent rate in the July-September quarter. Economists expect growth of around 2.5 percent in the current quarter, and they believe 2015 will bring further spending gains and growth of around 3 percent.

The small rise in spending and income left the saving rate unchanged at 5 percent of after-tax income.

Inflation remained a no-show with a price gauge tied to spending rising by just 1.4 percent over the past months, well below the 2 percent target for inflation favored by the Federal Reserve.

The 3.9 percent third quarter increase in the gross domestic product, the economy's total output of goods and services, represented an upward revision from an initial estimate of 3.5 percent with much of the new-found strength coming from faster consumer spending.

The government estimated that spending grew at a 2.2 percent rate, an improvement over the 1.8 percent initially estimated.

Economists believe spending will remain solid in the current October-December quarter thanks in part to solid gains in employment and falling gas prices, which give people more to spend elsewhere.

The National Retail Federation, a trade group, is forecasting that holiday sales will rise 4.1 percent this year, compared with 2013. That would be the biggest gain in three years.

The job market has made steady progress this year. Employers have added an average of 239,000 jobs a month through October. That would make hiring in 2014 the strongest that the U.S. has seen in 15 years. The unemployment rate has fallen to 5.8 percent, a six-year low, from 7.2 percent just one year ago.

The Federal Reserve last month recognized signs of the improving economy, but its language suggests that it does not intend to raise a key short-term interest rate for a "considerable time." Many economists believe with inflation still low, the Fed is willing to wait until the middle of 2015 before it begins to boost interest rates.