The European Union's executive is proposing a 315-billion euro ($380 billion) investment plan to boost the bloc's flagging economy, a scheme whose success will depend on leveraging 21 billion euros in guarantees and seed money to attract private... 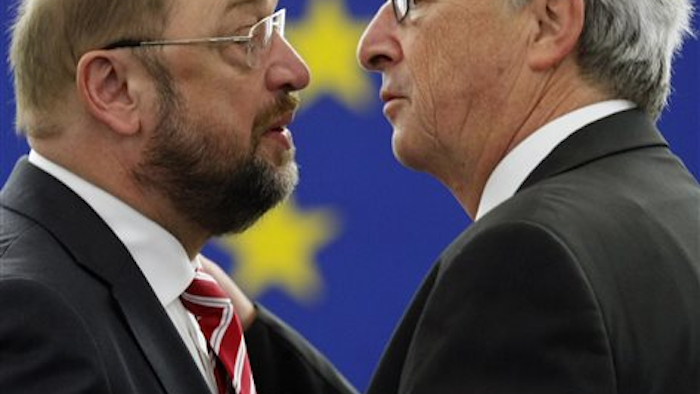 The European Union's executive is proposing a 315-billion euro ($380 billion) investment plan to boost the bloc's flagging economy, a scheme whose success will depend on leveraging 21 billion euros in guarantees and seed money to attract private funds.

European Commission President Jean-Claude Juncker said Wednesday that the long-awaited plan will not increase debt and will be based on EU guarantees to entice private sector investment in education, transport, the digital economy and the environment.

Juncker estimated that every euro invested in the three-year scheme could generate investment of about 15 euros.

Europe's economy has been struggling to grow since it emerged from recession over a year ago, partly because many governments are still cutting back on spending to reduce debt. The European Central Bank has offered economic stimulus, but says it can only do so much, and that investment needs to pick up.

Juncker's plan aims to do that, though a lot will depend on its effectiveness.

"Europe is back in business," Juncker told the European Parliament in Strasbourg, France. "We are offering hope to millions of Europeans disillusioned after years of stagnation."

The proposal will now be discussed by the 28 EU leaders at the Dec. 18-19 summit.

Juncker said the fund was necessary to jump start Europe's economic engine, since investors on the continent are wracked by uncertainty. "Investors lack confidence, credibility and trust," Juncker said.

The EU said there was plenty of liquidity in the market but investors were looking for the right projects.

Investment levels in the EU are down some 430 billion euros ($540 billion) compared with 2007, before the financial crisis exploded. And while investment is back on the rise in the United States, Europe is lagging behind.

He insisted the plan would not rely on creating more public debt, which already stands at some 90 percent of gross domestic product in the EU. He said the seed money from the EU budget would be coming from the funds which were now badly used and will be redirected.

"Either we continue business as usual with traditional grants and loans, and that is as far as the money goes," Katainen said. "Or we use our budget the most efficient way - to support riskier borrowing and create a larger lending capacity."