Among the OECD's euro constituency— 14 of the 17 EU countries that use the euro are members of the OECD — the proportion trusting government fell from 49.1 to 42.8 percent over the same period. In Japan, the situation's even worse, dipping from 27 percent in 2010 to 17 percent last year. 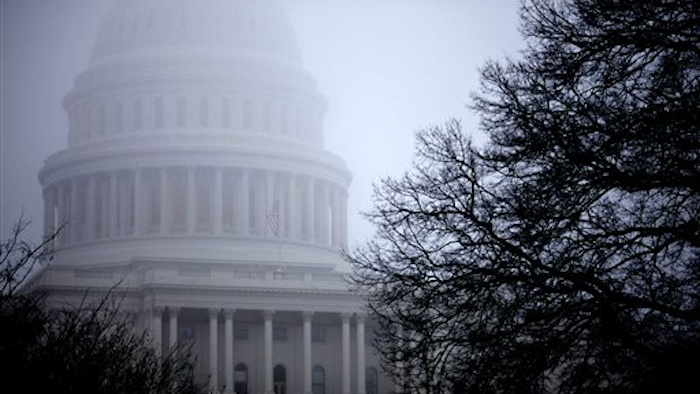 BRUSSELS (AP) -- The financial crisis of the past few years has severely sapped confidence in government around the globe, a think-tank representing the world's wealthiest economies said Tuesday.

"In countries most hit by the crisis, the people have lost trust in their institutions to actually help them and solve their problems," said Martine Durand, the chief statistician of the Organization for Economic Cooperation and Development.

The report, "How's Life? 2013," showed that the percentage of people that trust national government declined in the United States from 50 percent in 2009 to 35 percent last year.

Among the OECD's euro constituency— 14 of the 17 EU countries that use the euro are members of the OECD — the proportion trusting government fell from 49.1 to 42.8 percent over the same period. In Japan, the situation's even worse, dipping from 27 percent in 2010 to 17 percent last year.

If any country typifies the human cost of the financial crisis, it might well be Greece, which had to be bailed out to stave off bankruptcy at a high cost to employment, living standards and social services.

"In Greece, the percentage of people reporting that they trust the government fell from 38 percent to 13 percent," said Durand. "So you can sort of see the distrust in institutions between 2007 and 2012."

Bucking the trend was Britain, where people trusting government increased from 36 percent to 47 percent between 2007 and 2011.

The report found that government wasn't the only institution facing a loss of confidence. Similar declines were registered for financial and judicial institutions and the media. In Europe, the outlook is even bleaker since citizens appear to trust each other less and less.

The report sought to measure the quality of life beyond purely financial parameters such as gross domestic product. Issues like housing, health, personal security, education and social connections were all assessed.

Though the OECD shied away from setting up a ranking, the OECD's statistician Romina Boarini said Australia, Canada, and Nordic European nations were among the top performers since they scored exceptionally high in many of the 11 issues under review.