Taiwan's struggling computer makers are promoting what might be their last hope of turning back the seemingly unstoppable momentum of Apple's iPad. 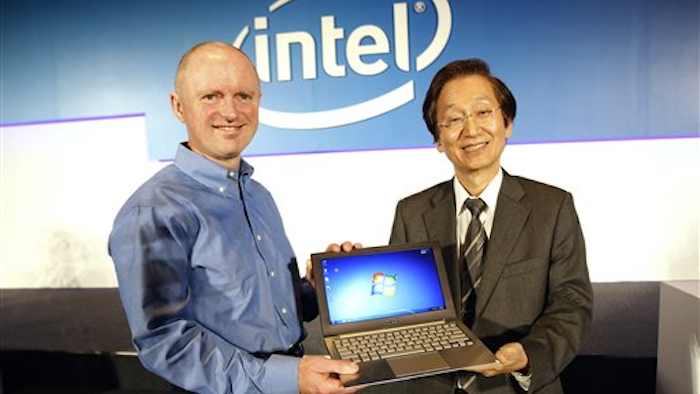 TAIPEI, Taiwan (AP) — Taiwan's struggling computer makers will use next week's Computex show to promote a new generation of ultra-thin laptops that might be their last hope of turning back the seemingly unstoppable momentum of Apple's iPad and other hot-selling tablets.

The brainchild of Intel Corp., the sleek laptop-tablet hybrid known as Ultrabook is 0.8 inches (20 mm) thick and features instant log on and ultra-sharp visual images.

Taipei's Computex, the world's second-largest computer show, will display more than a dozen 12- to 17-inch Ultrabook models powered by Intel's new generation of "Ivy Bridge" processors, which were unveiled in April.

Ultrabook's success is crucial for computer makers and others in the industry. World PC sales have stalled since Apple's 2010 launch of the slickly designed iPad made personal computing and the Internet even more portable for consumers.

The onslaught of the iPad and a host of imitators has cut deeply into the revenues of Taiwan's top two brands — Acer and AsusTek Computer Inc. Acer has slipped to the world's fourth largest PC vendor from No. 2 amid stalled sales, while AsusTek comes in fifth.

"All the companies are pinning their hope on Ultrabook, which in fact may be their last hope," said Stephen Su, a market analyst at Taiwan's Industrial Technology Research Institute.

"If the current market trend continues, tablet sales may exceed PC sales by 2016, and they hope Ultrabook can reverse the trend," he said.

The "Ivy Bridge" processors use the 22-nanometer process technology that allows for more powerful and electricity-efficient computing devices than the typical tablet. It will employ Microsoft Corp.'s much ballyhooed Windows 8 software once that debuts later this year. Su said the Ultrabook's success depends to a large extent on how well Windows 8 is received.

Ultrabooks were first sold in the final quarter of last year. The hybrid model is a creation of the decades-old alliance between Taiwan and technology giants Intel and Microsoft.

Using Intel chips and Windows software, Taiwanese makers produce more than 90 percent of the laptops sold in the world, for global brands including Apple, Hewlett-Packard and Dell. Almost all the units are assembled in China.

Acer, Taiwan's largest computer vendor, predicts Ultrabook will account for up to 20 percent of its total PC shipments toward the final quarter this year. But its executives declined to make longer term forecasts, citing the market's volatility and the sputtering global economy.

"Ultrabook sales are gaining momentum, and with the new Windows software, it will give users a touch screen experience that's equal to or excels that of tablets currently in the market," said Henry Wang of Acer.

According to research firm Gartner Inc., global PC shipments are expected to gain a lackluster 4.4 percent to 368 million machines in 2012, after shrinking 1.4 percent in 2011.

As volumes rise, prices of Ultrabooks could fall from $1,000 to $800 in the second half to become a viable competitor to the light and ultracompact MacBook Air, analysts say. The Apple laptop now starts at $999.

Taiwan's Topology Research Institute predicts Ultrabook can account for 50 percent of laptops sold in the world by 2014.

"MacBook Air may have appeal to Apple fans and some professionals, but others may like Ultrabook better because they are more familiar with its features," said Amily Chen, a Topology analyst.

By working with Intel, the entire Taiwanese computer industry could get much needed technology support from the chip giant, she said.

"To make it more power efficient, the ultralight computer requires screen drive IC and other components that are more complicated to build," she said.

Taiwanese vendors are also trying to get a piece of the ever-expanding tablet market. Scores of new models will be unveiled during Computex's five-day run, organizers say.

AsusTek's 10-inch Android-powered Transformer has sold well and the company is expected to unveil several new models at Computex. Google reportedly has been collaborating with AsusTek in rolling out a 7-inch tablet computer to compete with Amazon's low-priced Kindle Fire.